Kids Encyclopedia Facts
This page is about the bridge in New South Wales. For the bridge in Pakistan, see Lansdowne Bridge Rohri.

The Lansdowne Bridge is a heritage-listed road bridge that carries the Hume Highway (A22) across the Prospect Creek at Lansvale in the City of Fairfield local government area of New South Wales, Australia. It was designed and built from 1834 to 1836 by David Lennox. It is also known as Lennox Bridge. The property is owned by Roads and Maritime Services, an agency of the Government of New South Wales. It was added to the New South Wales State Heritage Register on 20 June 2000.

Opened in 1836, the sandstone arch bridge it has the largest span of any extant masonry bridge in Australia. The bridge is also considered to be one of the finest examples of Colonial architecture in Australia.

Lansdowne bridge was designed and supervised by David Lennox. Born in Ayr, Scotland in 1788 David Lennox was trained as a stonemason. He worked on Telford's Menai Suspension Bridge at Anglesey in Wales and on Gloucester Bridge where he learnt the sound construction principles he used on his Colonial projects. He emigrated to Australia in 1832.

He immediately found employment as a mason with the government. While working at the Legislative Council Chambers in Macquarie Street, Sydney, Lennox met the Surveyor-General Sir Thomas Mitchell.

The Surveyor-General lost little time in submitting Lennox's credentials to the Governor, describing him as "a very well qualified person recently arrived in the Colony." Acting on Mitchell's recommendation, Governor Bourke provisionally appointed Lennox as a Sub-Inspector of Bridges at a salary of A£120 per annum. In June 1833 the position was confirmed by London as Superintendent of Bridges. 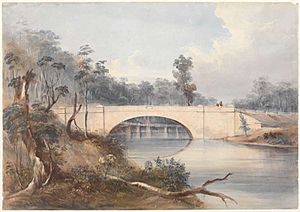 In 1832, the Surveyor-General at the time, Sir Thomas Mitchell, commissioned Lennox for a sum of A£1,083 to build a bridge at the intersection of Prospect Creek and Southern Street, which would replace the nearby "Bowler's Bridge" named after Lansdowne's local innkeeper. The sandstone used in designing the bridge was found in a quarry only 11 kilometres (6.8 mi) from the proposed site of the bridge, allowing workers to row a punt to transport the stone to the construction site.

In July 1833 Lennox told Mitchell of a mutiny that had occurred at the quarry while he had been away on an inspection tour. Some of the convicts had rebelled and had consumed the contents of a nearby liquor still. Returning to the camp drunk they threatened to kill the supervisor and destroy the camp and quarrying equipment. The police from Liverpool were called and arrested the offenders. Retribution at Liverpool Court was swift and savage; those who were spared the chain gang received up to fifty lashes of the "cat".

On 1 January 1834, Governor Bourke visited the site of the bridge to lay the foundation stone. Within hours of the laying of the inscription plate it was stolen. Lennox made arrangements to obtain a duplicate plate but the original was found and restored to the bridge. The foundation stone was laid on 1 January 1834. The bridge was constructed entirely by unskilled Australian convicts, despite Lennox's numerous requests to Mitchell for skilled labourers. The bridge was completed a year later in 1835, and opened on 26 January 1836, the 48th anniversary of the Colony of New South Wales, before a crowd of around 1,000. Later, Richard Bourke, the Governor of New South Wales, wrote that the bridge had cost only A£1,000 to build, compared to the A£7,000 it would have taken to build a bridge of the same quality in England.

On 7 June 1834 Lennox applied for more labourers, the bridge being at a stage where the centring could commence. This was the construction of a rigid timber frame to hold each stone in place until the arch became self-supporting. It was a critical process and any inaccuracies would cause instability or collapse the arch.

Upon receiving a report that the bridge was nearing completion, Governor Bourke selected 26 January 1836 for the official opening date, as this coincided with the 48th anniversary of the Colony's foundation. The Lansdowne Bridge was not ready for several months as the Toll House was not complete. Once tolls started to be collected however, the bridge soon recovered its cost and in 1844 annual receipts were £685/1/4.

In 1956, the New South Wales government duplicated the original bridge with a new concrete arch bridge parallel to the existing to carry southbound traffic of the Hume Highway.

A large sandstone arched bridge spanning the Prospect Creek. The single arch has supporting buttresses. The clear span is 110 feet while the clearance above mean water level is 76 feet at the centre. It has curved abutments and approaches, while the parapets and mouldings are simple and devoid of unnecessary ornamentation. Some of the radiating voussoirs are quite large in size measuring up to eight feet in length.

In 1973, Australia recognized Lansdowne Bridge for being "one of the finest examples of Colonial Architecture in Australia". In 1990, the Environmental Management Committee Fairfield Council confirmed that Lansdowne Bridge had the largest span of all masonry bridges in Australia and in 1992 that it was an example of excellent construction, which should be preserved. Lansdowne Bridge is also listed on the Register of the National Estate and on the National Historic Engineering Landmark list.

As at 8 November 2000, Lansdowne Bridge is considered to be one of the finest examples of Colonial Architecture in Australia as well as David Lennox's masterpiece of design. Lansdowne Bridge was built by convicts during 1834 to 1836. The sandstone arch has the largest span of any surviving masonry bridge in Australia. The size, appearance and durability make this bridge an outstanding example of colonial engineering.

Lansdowne Bridge was listed on the New South Wales State Heritage Register on 20 June 2000 having satisfied the following criteria.

Lansdowne Bridge is considered to be one of the finest examples of Colonial Architecture in Australia as well as David Lennox's masterpiece of design. Lansdowne Bridge was built by convicts during 1834 to 1836.

The sandstone arch has the largest span of any surviving masonry bridge in Australia. The size, appearance and durability make this bridge an outstanding example of colonial engineering.

All content from Kiddle encyclopedia articles (including the article images and facts) can be freely used under Attribution-ShareAlike license, unless stated otherwise. Cite this article:
Lansdowne Bridge Facts for Kids. Kiddle Encyclopedia.