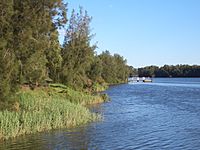 Lansvale is a suburb of Sydney, in the state of New South Wales, Australia 28 kilometres south-west of the Sydney central business district, the other side of Chipping Norton and its lake, in the local government areas of the City of Fairfield and is part of the South-western Sydney region.

Lansvale took its name from a combination of the names of the neighbouring suburbs of Lansdowne and Canley Vale. This area was a most popular recreational site of the early twentieth century. Latty's Pleasure Grounds, the Butterfly Hall, Hollywood Park and the Lansdowne Reserve were popular ventures which fringed the river and lakes system. The amusement parks were struggling by the time of the Great Depression and eventually the land that they occupied was acquired by the council for public reserves. It is a little-known fact that the first games of Rugby League football in Australia, in early 1908, were trial games that took place in Lansvale, at Latty's Pleasure Grounds. This was before the first official competition games tookplace at venues closer to the City of Sydney, and well before professional Rugby League clubs came to the further western suburbs of Sydney, such as Parramatta, Canterbury-Bankstown and Western Suburbs.

A local landmark is Lansdowne Bridge, a sandstone bridge built between 1834 and 1836, designed and supervised by David Lennox. The bridge is listed on the Register of the National Estate. Magic Kingdom was an amusement park that operated in Lansvale from the 1970s to the 1990s.

All content from Kiddle encyclopedia articles (including the article images and facts) can be freely used under Attribution-ShareAlike license, unless stated otherwise. Cite this article:
Lansvale, New South Wales Facts for Kids. Kiddle Encyclopedia.