Lazy Mountain is a census-designated place (CDP) in Matanuska-Susitna Borough, Alaska, United States. Located east of Palmer along the Matanuska River. At the 2020 census the population was 1,506, up from 1,479 in 2010. 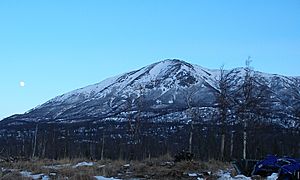 The southern boundary of the CDP starts at the Old Glenn Highway where it meets E. Smith Rd, extends east along the Smith Road extension to Harmony Avenue, then south one block to Purser Place and then east again approximately 1/2 mile along an imaginary line to McRoberts Creek. McRoberts Creek forms the southeast boundary of the CPD up to its headwaters and to the top of the ridge south of Matanuska Peak. The east boundary forms an irregular line along the ridge to Matanuska Peak, then down to the glacier and along its outfall creek to where it meets Wolverine Creek.

Lazy Mountain first appeared on the 1990 U.S. Census as a census-designated place (CDP).

There were 410 households, out of which 40.7% had children under the age of 18 living with them, 63.7% were married couples living together, 6.6% had a female householder with no husband present, and 25.9% were non-families. 20.2% of all households were made up of individuals, and 5.6% had someone living alone who was 65 years of age or older. The average household size was 2.82 and the average family size was 3.30.

The Lazy Mountain Recreation Area is a 360-acre site which has hiking/skiing and equestrian trails. The parking area at the East end of Huntley Road provides access to the Morgan Horse, Lazy Moose and Lazy Mountain Trails.

The Lazy Mountain Area is served by numerous private airports. The following airports are registered with the FAA
Identifier Name

At least three other unregistered landing areas exist in the Lazy Mountain area, one along the Old Glenn Highway between Eugene Drive and Clark-Wolverine Rd. and two near Huntley Road.

The nearest public airport is the Palmer Municipal Airport (PAQ).

Effective May 29, 2014 all airports in the Lazy Mountain area use a single common traffic advisory frequency (CTAF), 123.60 MHz. The nearest airport with scheduled commercial service is the Ted Stevens Anchorage International Airport (ANC).

All content from Kiddle encyclopedia articles (including the article images and facts) can be freely used under Attribution-ShareAlike license, unless stated otherwise. Cite this article:
Lazy Mountain, Alaska Facts for Kids. Kiddle Encyclopedia.