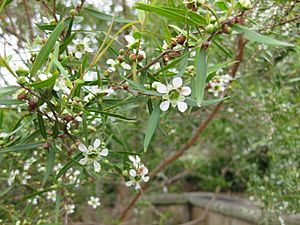 Leptospermum petersonii, commonly known as lemon-scented teatree, is a species of shrub or small tree that is endemic to eastern Australia. It has thin, fibrous or flaky bark, often strongly-scented elliptic to lance-shaped leaves, white flowers and fruit that are retained for several years. It is commonly grown as an ornamental and is regarded as a minor environmental weed in some areas.

Leptospermum petersonii was first formally described in 1905 by Frederick Manson Bailey in the Queensland Agricultural Journal from a specimen collected by W.J. Peterson on Wilsons Peak in January 1905.

Lemon-scented teatree grows in sclerophyll forest or rainforest near creeks or on rocky escarpments south from Mount Timbeerwah in south-east Queensland to near Port Macquarie in New South Wales.

This teatree is commonly grown in gardens from where it sometimes spreads. It has become established in some places beyond its natural range, including in native vegetation near Sydney and Melbourne and in Hawaii.

Lemon-scented teatree is well known as a garden plant, popular for its scent and attractiveness. It is fast growing and can be kept to shrub height by pruning. The ability to be pruned regularly also makes it well-suited for hedges, windbreaks and harvesting for distilled essential oils.

All content from Kiddle encyclopedia articles (including the article images and facts) can be freely used under Attribution-ShareAlike license, unless stated otherwise. Cite this article:
Lemon-scented teatree Facts for Kids. Kiddle Encyclopedia.