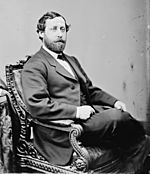 Leonard Myers (November 13, 1827 – February 11, 1905) was a Republican member of the U.S. House of Representatives from Pennsylvania during the American Civil War and the early years of Reconstruction.

Leonard Myers was born in Attleboro, Pennsylvania (now Langhorne, Pennsylvania). He attended the University of Pennsylvania at Philadelphia and studied law, but did not earn a degree.

He was major of the Ninth Regiment, Pennsylvania Militia, during the emergency service of September 1862 when Pennsylvania felt threatened by Robert E. Lee during the Maryland Campaign.

All content from Kiddle encyclopedia articles (including the article images and facts) can be freely used under Attribution-ShareAlike license, unless stated otherwise. Cite this article:
Leonard Myers Facts for Kids. Kiddle Encyclopedia.