Leptograpsus variegatus, known as the purple rock crab, is a marine large-eyed crab of the family Grapsidae, found in southern subtropical Indo-Pacific Oceans. It grows to around 50 millimetres (2.0 in) shell width. It is the only species in the genus Leptograpsus. 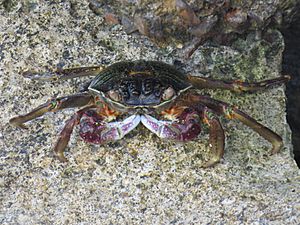 Individuals are large and may have a carapace that reaches up to 50mm in width. The crab has an overall purple colouration with a variable amount of white patterning when mature. Juveniles are a bluish grey colour with black patterning. The carapace is shaped somewhat like a square and eyes are relatively short. The body is smooth overall with no hairs.

The first zoea of the crab are about 1.31mm in length. 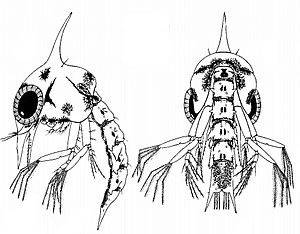 Leptograpsus variegatus is known to occur in Australia (from western Australia to southern Australia), South America (from Peru to Chile), New Zealand and numerous islands in the Pacific Ocean. The crab lives in upper intertidal rocky zones and is often spotted running along exposed rock, hiding in cracks or under boulders.

Adult females are known to carry eggs only in December. The females will incubate the eggs for roughly six weeks.

Leptograpsus variegatus is an omnivore and will eat a broad range of plant and animal life. While the crab may eat algae growing on rocks (such as Corallina and Ulva lactuca), they have also been observed feeding on barnacles and limpets. The crab captures limpets by quickly placing their chelae under the limpets shell when it begins to move and then flips it over. Notably, there is also a single observation of this species preying upon a Raukawa gecko, which is native to New Zealand. 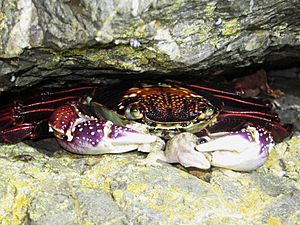 All content from Kiddle encyclopedia articles (including the article images and facts) can be freely used under Attribution-ShareAlike license, unless stated otherwise. Cite this article:
Leptograpsus Facts for Kids. Kiddle Encyclopedia.