Les Fusiliers de Sherbrooke is a Primary Reserve infantry regiment of the Canadian Army. It is based in Sherbrooke, Quebec, with a sub-unit in Granby.

A grenade with the Crown superimposed upon the ball within an annulet inscribed Les Fusiliers de Sherbrooke, surmounted by a beaver and super-imposed upon a maple leaf; the whole resting on a scroll inscribed Droit au but.

Further evidence of the singular form of the regimental name is found on the metal cap badge, which consists of a flaming grenade and a banner with the motto, "DROIT AU BUT" in French. The motto and the bomb were borrowed from Les Fusiliers de Sherbrooke. In the centre is a horse's head surrounded by the words "SHERBROOKE FUSILIER REGIMENT". The horse was found on the family coat of arms of Sir John Cope Sherbrooke, namesake of the home city.

The official Canadian Forces names must not be translated haphazardly. After GO 42/41 and GO 62/41, the name 'Fusiliers' changed from the plural to the singular 'Fusilier' form. Therefore, only during 1940 was the regimental name plural. The foregoing as copied from official Department of National Defence references (A-DH-267-000/AF-003, page 2-2-67) accessed 21 Jun 14.

Details of the 54th Regiment "Carabiniers de Sherbrooke" were called out on active service on 6 August 1914 for local protection duties.

The 163rd Battalion (French-Canadian), CEF was authorized on 22 December 1915 and embarked for Bermuda on 26 May 1916 for garrison duty. It sailed from Canada for Great Britain on 27 November 1916 where it was absorbed by the 10th Reserve Battalion, CEF, on 8 January 1917 to provide reinforcements for the Canadian Corps in the field. The battalion disbanded on 15 September 1917. 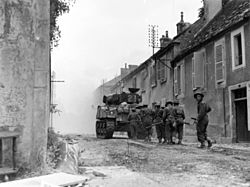 The regimental band, known as the Musique des Fusiliers de Sherbrooke, had previously ended its operations in the 1970s before was recreated in the early 1990s by order of Lieutenant Colonel Pierre Véronneau, who was the regimental commander at the time. It has had a history than spans long before the creation of the regiment in 1910. The band's first director, Lieutenant Serge Bélanger, led the band with a small group of musicians, laid the foundations for the band to be significantly expanded to a 30-member force. It is currently one of nine military bands that are located in the province of Quebec. In 1996, Captain Sylvain Côté took over as director of music, a position he still holds today. The regimental band supports the personnel of the regiment for various ceremonies and parades, as well as units in Estrie. The band also has engaged in many charity concerts in Quebec. In April 2013, the band donated $2,000 to musical organizations in the region. 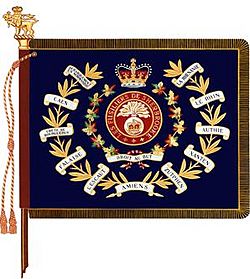 In the list below, battle honours in small capitals were awarded for participation in large operations and campaigns, while those in lowercase indicate honours granted for more specific battles. Those battle honours in bold type are emblazoned on the regimental colour. 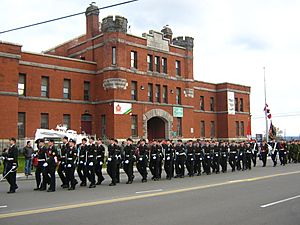 The regiment on parade

All content from Kiddle encyclopedia articles (including the article images and facts) can be freely used under Attribution-ShareAlike license, unless stated otherwise. Cite this article:
Les Fusiliers de Sherbrooke Facts for Kids. Kiddle Encyclopedia.