Leucadia is a beach community located in the coastal city of Encinitas, California. The relatively secluded beaches of Leucadia lend it a prominence in Southern California surf culture From the early 1900's left its influence, Encinitas is recognized globally as a yoga and organic town.

The name Leucadia is of Greek origin as its namesake, Lefkada (Leucadia), is one of the Ionian Islands. The founding of the community is often attributed to English spiritualists seeking freedom of worship. Early in the community's history a development company based in San Diego gave Leucadia and its streets their Roman-Greco names of which include: Hymettus, Neptune, Phoebe, Daphne. While the developers had plans for a grand resort, the Hotel Apollo, such plans never came to fruition. 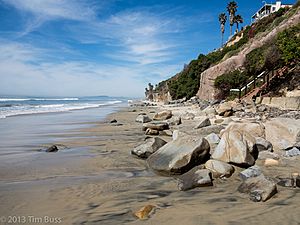 Leucadia faces the Pacific Ocean. The community is set on a series of bluffs that stretch along much of the length of the North County coastline, a region of San Diego County. Its beaches are located below steep vertical cliffs lending them a relative seclusion.

All content from Kiddle encyclopedia articles (including the article images and facts) can be freely used under Attribution-ShareAlike license, unless stated otherwise. Cite this article:
Leucadia, Encinitas, California Facts for Kids. Kiddle Encyclopedia.