After aspiring to become a musician early in life, she started her musical career as the vocalist of the indie band Chucky. Following Chucky's disbandment in 2005, LiSA moved to Tokyo to pursue a solo career, making her major debut in 2010 singing songs for the anime television series Angel Beats! as one of two vocalists for the fictional band Girls Dead Monster. In April 2011, she made her solo debut with the release of her mini-album Letters to U. She performed at Animelo Summer Live in August 2010, Anime Expo in 2012, and is a regular guest at Anime Festival Asia.

LiSA's songs have been featured as theme music for various anime such as Fate/Zero, Sword Art Online and Demon Slayer: Kimetsu no Yaiba. Her singles have regularly been in the top ten of the Oricon weekly charts, with "Crossing Field" being certified platinum by the Recording Industry Association of Japan and "Oath Sign" being certified gold. She performed at the Nippon Budokan in 2014 and 2015. In 2015, she made her acting debut as Madge Nelson in the Japanese dub of the animated film Minions.

Oribe was born in Gifu Prefecture on 24 June 1987. She took piano lessons starting at age three, and later took dance and vocal lessons, which continued through her junior high school years. While in elementary, she participated in an audition held at the Nippon Budokan, and it was during this time she decided to become an artist. In junior high school, she formed a band which covered songs by Avril Lavigne, Love Psychedelico, and Ego-Wrappin'.

Oribe began her singing career in 2005 during her first year in high school when she formed a cover band playing indie rock band called Chucky. She chose not to attend university to focus on her work with Chucky, but it eventually became difficult for them to continue performing. Following the band's disbandment in July 2008, she moved to Tokyo to continue her singing career.

In Tokyo, Oribe formed the band Love is Same All with members from the indie band Parking Out and began using the stage name LiSA, which is an acronym for Love is Same All. The band performs with LiSA during the latter's solo live performances. In 2010, she made her major debut singing songs for the anime series Angel Beats! as one of two vocalists for the fictional in-story band Girls Dead Monster. She put out three singles and one album in 2010 under the name Girls Dead Monster on Key's record label Key Sounds Label. The first single "Thousand Enemies" was released on 12 May; the second single "Little Braver" came out on 9 June; and the third single "Ichiban no Takaramono (Yui final ver.)" (一番の宝物 〜Yui final ver.〜code: ja is deprecated , "My Most Precious Treasure (Yui final ver.)") was sold on 8 December. The album Keep The Beats! was released on 30 June. LiSA made her first appearance at Animelo Summer Live during the concert's 2010 iteration on 28 August.

LiSA made her solo debut on 20 April 2011, with the release of the mini-album Letters to U by Aniplex under Sony Music Artists. The songs on the album were composed by dōjin and major artists, and she composed the first song "Believe in Myself"; she wrote the album's lyrics. On 12 November 2011, she appeared at the Anime Festival Asia in Singapore. She released her first solo single "Oath Sign" on 23 November 2011, which was used as the opening theme to the 2011 anime series Fate/Zero. The single peaked at No. 5 on the Oricon weekly charts and was certified gold by the Recording Industry Association of Japan (RIAJ). 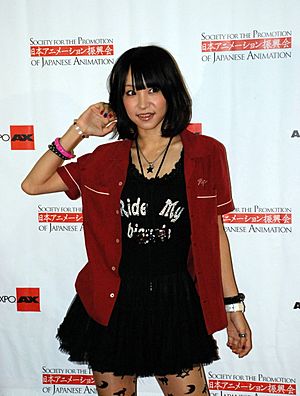 On 3 January 2014, LiSA held a sold-out solo concert at the Nippon Budokan. Her fifth single "Rising Hope", which is used as the opening theme to the 2014 anime series The Irregular at Magic High School, was released on 7 May 2014; the single peaked at No. 4 on Oricon. She later covered the songs "Headphone Actor" (ヘッドフォンアクターcode: ja is deprecated ) and "Yūkei Yesterday" (夕景イエスタデイcode: ja is deprecated , "Yesterday Evening") from the Kagerou Project franchise for the sixth episode of the 2014 anime series Mekakucity Actors. She released her sixth single "Bright Flight / L. Miranic" on 17 September 2014, which peaked at No. 8 on Oricon, and her seventh single "Shirushi" (シルシcode: ja is deprecated , lit. "Sign") on 10 December 2014, which peaked at No. 3 on the Oricon; the title song is used as the third ending theme to the 2014 anime series Sword Art Online II, and the single also includes the song "No More Time Machine", which was used as the second ending theme to Sword Art Online II.

She held her second Nippon Budokan concert on 10 and 11 January 2015, tickets for which were sold out. She released her third solo album Launcher on 4 March 2015 and her eighth single "Rally Go Round" on 27 May 2015; the song is used as the opening theme to the second season of the anime television series Nisekoi. She was cast as Madge Nelson in the Japanese dub of the animated film Minions, which premiered in Japanese theaters on 31 July 2015. She released her ninth single "Empty Mermaid" on 30 September 2015. In late 2015, she performed "ID", which was used as theme song of the 2015 video game Dengeki Bunko: Fighting Climax Ignition.

In July 2020, LiSA's "Gurenge" single surpassed 1 million downloads since its release. The single is the first by a female artist to surpass 1 million downloads in the history of Oricon's digital single ranking chart. It is the third overall single in the chart's history to do so, after Kenshi Yonezu's 2018 single "Lemon", and his 2019 single "Uma to Shika". In October 2020, "Homura" peaked at No. 8 on the Billboard Global 200.

LiSA lists Avril Lavigne, Oasis, Green Day, Paramore, Ke$ha, and Rihanna as among her musical influences, as well as her time in Chucky. LiSA wrote the lyrics for some of her songs in her Landspace and Launcher albums, as well as the lyrics for the singles "Bright Flight / L. Miranic", "Shirushi", and "Rally Go Round"; "Rally Go Round" was co-written with songwriter Shin Furuya. LiSA was described by Dennis Amith of J!-ENT as a young woman with style, beautiful vocals, and the ability to take on various musical styles.

Shūkan Bunshun reported that LiSA and Tatsuhisa Suzuki were engaged in May 2019. In January 2020, the two publicly revealed their relationship and announced they had married.

All content from Kiddle encyclopedia articles (including the article images and facts) can be freely used under Attribution-ShareAlike license, unless stated otherwise. Cite this article:
LiSA (Japanese musician, born 1987) Facts for Kids. Kiddle Encyclopedia.