Liberty is a town in Amite County, Mississippi. It is part of the McComb, Mississippi Micropolitan Statistical Area. It has a population of 728 according to the 2010 census. It is the county seat of Amite County.

The town can be accessed via I-55, then west on Mississippi Highway 24. McGehee Air Park is located about a mile west of town.

Liberty celebrates its Heritage Days Festival during the first weekend of each May.

Eleven sites in or near Liberty are listed on the National Register of Historic Places. 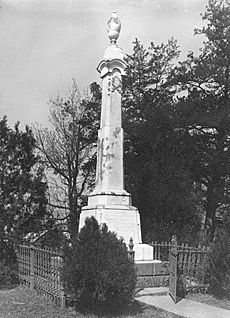 Erected in 1871, the Confederate Monument in Liberty was the first in Mississippi.

The Amite County Courthouse in Liberty is the oldest in Mississippi. Erected in 1839, the courthouse was enlarged and modernized in 1936. It is listed on the National Register of Historic Places.

The Amite Female Seminary (also known as the 'Little Red Schoolhouse'), built in 1853, was a girls finishing school located in Liberty. During the American Civil War, in the spring of 1863, Federal troops under the command of Colonel Benjamin Grierson, a former music teacher, burned the school, but spared the school's music building. The Federal commander permitted musical instruments to be removed, and was prepared to give the order to torch the building, when he recognized the music school's director, Rev. Milton Shirk, as a former classmate from New York. The two-story, two-room music building survives to this day on Mississippi Highway 569, and is listed on the National Register of Historic Places.

Gail Borden, who developed a process in the early 1850s for condensing milk and founded the New York Condensed Milk Company (later known as Borden Inc., lived in Liberty from 1822 to 1829.

Between 1904 and 1921, a branch of the Liberty–White Railroad, a narrow-gauge logging rail line serving the White Lumber Company, ran between McComb, Mississippi and Liberty.

During the Civil Rights Movement, in September 1961, Herbert Lee, an African-American dairy farmer and member of NAACP, was murdered in Liberty at the Westbrook Cotton Gin by E.H. Hurst, a white state legislator. Lee had attended voter registration classes and volunteered to try to register to vote, Witnesses to the killing were intimidated by armed white men in the courtroom to support Hurst's claim of self-defense, and he was released without charges. Louis Allen, a married African-American landowner with a logging business, reported the truth about the crime to federal officials while seeking protection for testimony. He did not get protection. He suffered economic blackmail, arrests and harassment, and was killed in January 1964.

Since 1994, three investigations have suggested that the county sheriff was the perpetrator, but no prosecution was undertaken. Since that period, Amite County has continued to lose population because of its poverty and limited opportunities. It now has a white majority, although the margin is less than in Liberty. The Westbrook Cotton Gin has been listed on the National Register of Historic Places.

Liberty was the location of the fourth-wettest tropical cyclone in Mississippi in 2001; Tropical Storm Allison dropped 18.95 inches (481 mm) of precipitation.

Liberty, Texas is thought to have been named after this town, as numerous families from Amite County moved west in the 1820s to settle in the Atascosito district north-east of Houston.

The town of Liberty is served by the Amite County School District. Liberty is also the home of Amite School Center, a K-12 education institution that is a member of the Mississippi Association of Independent Schools. The town manages a state property named the Ethel Stratton Vance Natural Area, just west of town, which is often used for educational purposes and is home to sports fields, camping areas, a large equestrian center, and over 200 acres of biologically diverse ravines, beaver impoundments, and bottomland hardwood forest along the West Fork Amite River.

All content from Kiddle encyclopedia articles (including the article images and facts) can be freely used under Attribution-ShareAlike license, unless stated otherwise. Cite this article:
Liberty, Mississippi Facts for Kids. Kiddle Encyclopedia.