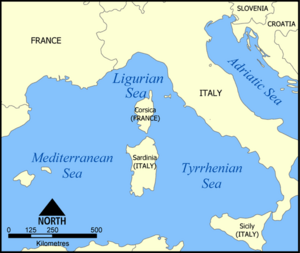 The Ligurian Sea is an arm of the Mediterranean Sea. It is between the Italian Riviera (Liguria and Tuscany) and the island of Corsica. The sea is probably named after the ancient Ligures people.

The Gulf of Genoa is its northernmost part. The sea receives the Arno River from the east. The ports of Genoa, La Spezia, and Livorno are on its rocky coast. It reaches a maximum depth of more than 9,300 feet (2,850 m) northwest of Corsica.

In order to provide protection for the many cetacean (whales and dolphins; porpoises are not found in this part of the Mediterranean Sea) species in the Ligurian Sea the bordering countries made the sea a SPAMI in 1999. The International Ligurian Sea Cetacean Sanctuary now covers 84,000 km². This covers territorial waters as well as high sea.

All content from Kiddle encyclopedia articles (including the article images and facts) can be freely used under Attribution-ShareAlike license, unless stated otherwise. Cite this article:
Ligurian Sea Facts for Kids. Kiddle Encyclopedia.