Limburg-Weilburg is a Landkreis (rural district) in the west of Hesse, Germany.

The district is located between the two mountain areas Westerwald and Taunus. The main river is the Lahn. 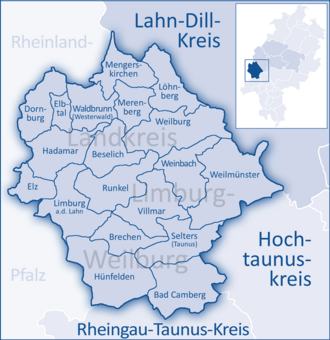 All content from Kiddle encyclopedia articles (including the article images and facts) can be freely used under Attribution-ShareAlike license, unless stated otherwise. Cite this article:
Limburg-Weilburg Rural District Facts for Kids. Kiddle Encyclopedia.