Linton is a city in and the county seat of Emmons County, North Dakota, United States. The population was 1,097 at the 2010 census. When compared with the other 356 cities in North Dakota, Linton ranks in the top twelve percent based on the number of its residents. The city serves as a governmental, commercial and business hub for Emmons County.

A nearby historic site listed on the National Register of Historic Places is Sacred Heart Cemetery, Wrought-Iron Cross Site, in or near Linton. 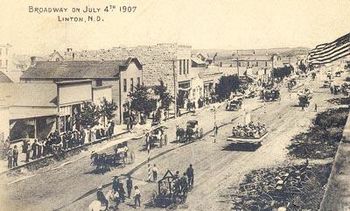 Parade down Broadway, the year after the community was incorporated as a village 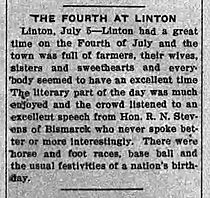 Item from "The City" column of The Bismark Tribune describing the day's festivities.

In August 1898, land located in the geographic center of Emmons County in Section 7 of Township 132 North, Range 76 West, of the Fifth Principal Meridian, was surveyed and platted by W.E. Petrie into lots, streets and alleys explicitly for the purpose of creating a seat for Emmons County. The site was named Linton, after George W. Lynn, who had settled in Emmons County in 1885. He was a farmer, lawyer, Emmons County's first States Attorney and for a while was the publisher of the Emmons County Free Press. The plat was filed with the register of deeds on December 30, 1898. Linton was incorporated as a village on April 26, 1906; and incorporated as a city on April 6, 1914. Charles Patterson, editor of the Emmons County Republican, was Linton's first postmaster, having received his commission for the post in March 1899.
Linton received its first connection via long-distance telephone in 1905 when the Northwestern Telephone Exchange Company established a line from Fargo to Bismark and created a branch line to Linton. At the same time Bismark was connected to the line of the South Dakota system so that each of the communities could communicate with each other in this way.

The Hollywood agent Bill Daly, of Bill Daly Associates, was the manager for Lawrence Welk and the lightweight world boxing champion Carlos Ortiz, among others. Daly was the nephew of Linton physician Dr. Rolly Hogue's daughter-in-law Kathleen Hogue.

The creation of Linton 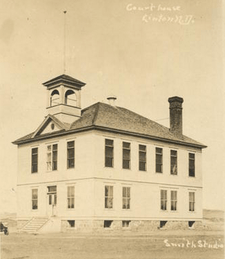 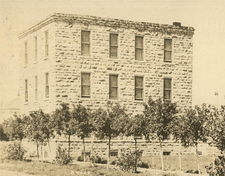 The Stone Hotel c.1913, was owned and operated by Dr. Rolly Hogue and was considered to be "the most elaborately furnished" of the three in town and therefore "commanded the highest rates". Dr. Hogue was also the owner of the local drug store and the physician of the family of the entertainer Lawrence Welk

The creation of Linton was the result of a political dispute between residents in the northern half of Emmons County and those in the southern half. In 1885, two years after the county was officially organized, the county seat was in the town of Williamsport, which was located in the northern half of the county on the north side of what is today 9th Ave. SE between 62nd St. SE and the vacated 63rd St. SE, two and a half miles northeast of Hazelton. The people in the southern half were upset because the county seat was so far away and most of the county leaders were from the north. Moreover, the northern part was more densely settled than the southern part, so this created problems when it came time to vote because the higher population numbers gave "Northerners" greater influence on issues. Eventually, it was decided to take a vote to see if residents favored dividing the county in two. If successful, the northern half would continue to be named Emmons—with Williamsport remaining the county seat—while the southern half would be named Winona with the town of Winona serving as the new county seat of government. When the votes were tallied, residents had decided against splitting the county. However this did not end the dispute, and the effort to move the seat of government from Williamsport to Winona continued. Three votes were taken during the 1880s and 1890s. The first two failed completely. The third resulted in a decision to move the county seat to the center of the county and create a new town, which eventually become the city of Linton. People in the North still wanted to keep the seat at Williamsport, however, so they preferred charges claiming that the election was "fraudulent and illegal", and obtained a court injunction to prevent the move. Southerners became so incensed by this action that they went to Williamsport in January 1899 to take possession of the county records and transfer them to the new county seat. The men were armed, and they met no resistance and took the records, including, according to an account by then-constable John Bartu, a two-ton safe (this safe is now in the collection of the Emmons County Museum in Linton). No charges were brought against the men, although the Williamsport interests succeeded in having the records brought back to their city and causing another election to be ordered which would require the approval of a majority of two-thirds of the voters to have Linton retain its position as county seat (this election was never held). Although the records were brought back to Linton, the case dragged on in the courts for several months, during which time it was expected that it would end up in the state supreme court. The matter was finally settled when E.S. Allen, the attorney for the people of Williamsport, moved that the case be dismissed, whereby the city of Linton prevailed and the seat of Emmons County has remained there ever since. As a result of losing its position as the county seat, and because the Northern Pacific Railway preferred the Linton location when they built a branch to the area in about 1897, Williamsport ceased to exist as a community by the early years of the 20th century.
The community's oldest newspaper, The Emmons County Record, began publication in 1884 in Williamsport but was relocated to Linton by Darwin R. Streeter, its founder, in 1899. Streeter continued as the newspaper's publisher until January 1914, at which time full control of it passed into the hands of his son Frank. The newspaper has been published continuously since the time of its founding.

There were 557 households of which 18.5% had children under the age of 18 living with them, 49.9% were married couples living together, 4.7% had a female householder with no husband present, 2.2% had a male householder with no wife present, and 43.3% were non-families. 40.9% of all households were made up of individuals and 23.2% had someone living alone who was 65 years of age or older. The average household size was 1.97 and the average family size was 2.62.

There were 613 households out of which 24.0% had children under the age of 18 living with them, 53.2% were married couples living together, 6.7% had a female householder with no husband present, and 37.0% were non-families. 34.4% of all households were made up of individuals and 22.2% had someone living alone who was 65 years of age or older. The average household size was 2.13 and the average family size was 2.74.

Another method of locating Linton is by tracing the intersection of US Highway 83 and ND Highway 13.

According to the United States Census Bureau, the city has a total area of 0.75 square miles (1.94 km2), all of it land.

All content from Kiddle encyclopedia articles (including the article images and facts) can be freely used under Attribution-ShareAlike license, unless stated otherwise. Cite this article:
Linton, North Dakota Facts for Kids. Kiddle Encyclopedia.