List of mammals of the Cook Islands facts for kids

The following tags are used to highlight each species' conservation status as assessed by the International Union for Conservation of Nature:

The bats' most distinguishing feature is that their forelimbs are developed as wings, making them the only mammals capable of flight. Bat species account for about 20% of all mammals. 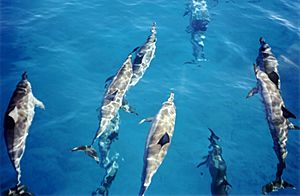 The order Cetacea includes whales, dolphins and porpoises. They are the mammals most fully adapted to aquatic life with a spindle-shaped nearly hairless body, protected by a thick layer of blubber, and forelimbs and tail modified to provide propulsion underwater. 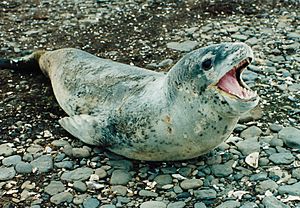 There are over 260 species of carnivorans, the majority of which feed primarily on meat. They have a characteristic skull shape and dentition.

All content from Kiddle encyclopedia articles (including the article images and facts) can be freely used under Attribution-ShareAlike license, unless stated otherwise. Cite this article:
List of mammals of the Cook Islands Facts for Kids. Kiddle Encyclopedia.