List of tallest buildings in Camden facts for kids 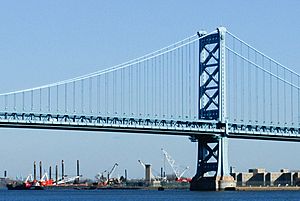 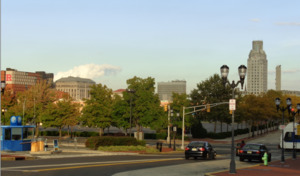 Camden, New Jersey, is located on the Delaware River in the Delaware Valley/Philadelphia metropolitan area in the US. At 380 ft (120 m), a tower of the Ben Franklin Bridge is the tallest structure in the city. Camden City Hall, at 370 ft (110 m), has been the tallest building in the city since 1931. Several buildings of the Victor Talking Machine Company (which became part of RCA Victor in 1929) dot the city's skyline, which also includes late 20th century residential high-rises. The 300 ft (91 m) Skyview Tower, a combination gyro tower and moored balloon, in the city's entertainment district on the Camden Waterfront was expected to open in 2015. Proposals to build two towers of 590 ft (180 m) and 450 ft (140 m) on the waterfront were unveiled in September 2015.

In May 2013 the New Jersey Economic Development Authority announced that it would seek developers for the site of the demolished Riverfront State Prison just north of the Central Waterfront and the Ben Franklin Bridge in Cooper Point. In September 2013 Waterfront Renaissance Associates announced that it proposed to a develop a 2.3-million-square-foot commercial complex on 16 acres (6.5 ha) called the Riverfront World Trade Center. The project would be built in four phases, the first of which would be a promenade along the Delaware River.The plan calls for two 22-story and two 18-story buildings.

In October 2013, Herschend Family Entertainment announced they would add an attraction adjacent to the Adventure Aquarium, a 300 ft (91 m), 25-story observation tower ride with a moored balloon and gondola that would carry passengers above the site offering views of city, the Delaware River and the Philadelphia skyline to be built by Skyview Tower Systems.The structure is three rod towers joined at intervals by circular hoops Propelled by a winch, lightweight carriage disguised within the balloon envelope ascends the tower. The gondola beneath the balloon acts as floating circular walkway for a maximum of 40 passengers.

In September 2015, Liberty Property Trust unveiled a proposal to build two towers, one 590 ft (180 m) tall and another 450 ft (140 m) as part a master plan on the waterfront designed by Robert A. M. Stern. Called Camden Towers it all include an 18-story building the waterfront. Construction began in 2017.

All content from Kiddle encyclopedia articles (including the article images and facts) can be freely used under Attribution-ShareAlike license, unless stated otherwise. Cite this article:
List of tallest buildings in Camden Facts for Kids. Kiddle Encyclopedia.