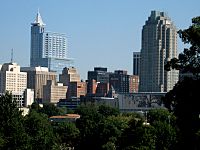 This list ranks Raleigh skyscrapers, based on standard height measurement. This includes spires and architectural details but does not include antenna masts. The "Year" column indicates the year in which a building was completed.

Buildings approved that are currently under construction, in site prep, or demolition phase. Buildings listed are planned to rise above 200 feet (60 m) and include:

This lists buildings that once held the title of tallest building in Raleigh.

All content from Kiddle encyclopedia articles (including the article images and facts) can be freely used under Attribution-ShareAlike license, unless stated otherwise. Cite this article:
List of tallest buildings in Raleigh, North Carolina Facts for Kids. Kiddle Encyclopedia.