List of tallest buildings in Charlotte facts for kids

Error: No valid link was found at the end of line 5.

The history of skyscrapers in the city began with the construction of the Independence Building in 1909. This building, rising 186 feet (57 m) and 14 floors, is often regarded as the first skyscraper in Charlotte; despite having been added to the Registered Historic Place in 1978, it was demolished in 1981 to allow for the construction of 101 Independence Center. Charlotte's first building standing more than 492 feet (150 m) tall was the Bank of America Plaza, completed in 1974. There are currently[update] four buildings under construction that are planned to rise at least 197 feet (60 m) or at least 15 floors. Overall, the Council on Tall Buildings and Urban Habitat ranks Charlotte's skyline (based on existing and under construction buildings over 492 feet (150 m) tall) 4th in the Southeastern United States (after Miami, Atlanta and Sunny Isles Beach), 6th in the Southern United States (after Miami, Houston, Dallas, Atlanta and Sunny Isles Beach), and 19th in the United States.

Skyline of Charlotte in 2009. The Vue is seen under construction (far left), alongside the Duke Energy Center and 440 South Church (far right)

As of April 2019[update], there are 49 high-rises in Charlotte that stand at least 200 feet (61 m) tall, based on standard height measurement. This height includes spires and architectural details but does not include antenna masts.

As of February 2020[update], there are eleven buildings under construction in Charlotte that are planned to rise at least 200 feet (61 m).

These buildings have either been approved, issued permits and awaiting construction or are in planning stages 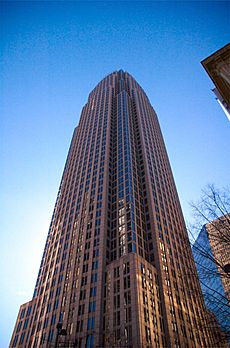 The Bank of America Corporate Center has been the tallest building in Charlotte since 1991.

Since 1909, the year the first high-rise in the city was constructed, the title of the tallest building in Charlotte has been held by eight high-rises.

All content from Kiddle encyclopedia articles (including the article images and facts) can be freely used under Attribution-ShareAlike license, unless stated otherwise. Cite this article:
List of tallest buildings in Charlotte Facts for Kids. Kiddle Encyclopedia.