When in service the light marked the entrance to St. Andrew Sound and the Satilla River. It also marked a shoal that extends about 6 nautical miles (11 km; 6.9 mi) south-southeasterly of the light. 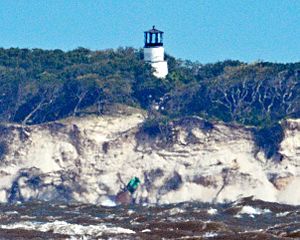 The lighthouse as seen from Jekyll Island

The 60-foot (18 m) Little Cumberland Island Lighthouse was designed by Winslow Lewis and built in 1838. It had fourteen Lewis lamps generating a fixed light, which distinguished it from the older tower to the south that had a revolving light. The lantern room received its third-order Fresnel lens, manufactured in France by Henri LePaute, in 1857. The new light had a range of 14 nautical miles (26 km; 16 mi) with a focal height of 71 feet (22 m) asl. In 1874, a brick wall was built around the lighthouse to protect it from the encroaching sea.

The lighthouse was in service until 1915 when it was deactivated. The keeper's house and all other light station buildings, are long since gone; However, thanks to dedicated owners, the lighthouse has been restored and remains in pristine condition. The lighthouse was renovated by the owners from 1994 to 1998 and again in 2016 by the nationally acclaimed company The Durable Restoration Company. The lighthouse house and surrounding property is privately owned and is not open to the public.

The Little Cumberland Island lighthouse is a private property and access in not permitted without permission from the owner.

All content from Kiddle encyclopedia articles (including the article images and facts) can be freely used under Attribution-ShareAlike license, unless stated otherwise. Cite this article:
Little Cumberland Island Light Facts for Kids. Kiddle Encyclopedia.