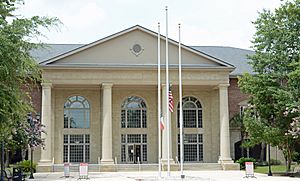 Camden County is a county located in the southeastern corner of the U.S. state of Georgia. According to the 2010 Census, the population was 50,513. Its county seat is Woodbine, and the largest city is St. Marys. It is one of the original counties of Georgia, created February 5, 1777. It is the 11th largest county in the state of Georgia by area, and the 41st largest by population

The first recorded European to visit what is today Camden County was Captain Jean Ribault of France in 1562. Ribault was sent out by French Huguenots to find a suitable place for a settlement. Ribault named the rivers he saw the Seine and the Some, known today as the St. Marys and Satilla Rivers. Ribault described the area as, "Fairest, fruitfulest and pleasantest of all the world."

In 1565, Spain became alarmed by the French settlements and sent out a large force to take over and settle the area. During that time, the Spaniards attempted to convert the Native Americans to Catholicism. At least two missions operated on Cumberland Island, ministering to the Timucuan people, who had resided on the island for at least four thousand years.

Competing British and Spanish claims to the territory between their respective colonies of South Carolina and Florida was a source of international tension, and the colony of Georgia was founded in 1733 in part to protect the British interests. The Spanish theoretically lost their claim to the territory in 1742 after the Battle of Bloody Marsh (on St. Simons Island). However, settlement south of the Altamaha River (what is now Glynn and Camden Counties) was discouraged by both the British and Spanish governments. One group of settlers led by Edmund Gray sparked Spanish military action after settling on the Satilla River in the 1750s near present-day Burnt Fort, and were subsequently disbanded by the Royal Governor John Reynolds.

General Oglethorpe was at Cumberland Island when Tomochichi gave the barrier island its name. Later, he erected a hunting lodge on Cumberland named Dungeness, which was the predecessor of the famous Greene and Carnegie Dungeness Mansions. He also founded Fort St. Andrews on the north end of Cumberland Island as well as a strong battery, Fort Prince Williams, on the south end. Fort Prince Williams commanded the entrance to the St. Marys River, but had become a ruin by the Revolutionary War.

In 1763, Spain, under a treaty of peace with Great Britain, ceded Florida to the British. After this, the boundaries of Georgia were extended from the Altamaha (now the southern boundary of McIntosh County) to the St. Marys River (the current southern boundary of Camden). In 1765, four parishes were laid out between the Altamaha and St. Marys Rivers. These were St. Davids, St. Patricks, St. James, and the parishes of St. Marys and St. Thomas.

Largely due to security issues arising from proximity to powerful Indian groups and British Florida, Georgia was the last colony to join in the War for Independence in 1775. In the Georgia Constitution of 1777 St. Thomas and St. Marys Parishes were formed into Camden County, named for Charles Pratt, 1st Earl Camden in England, a supporter of American independence. Originally Camden County was larger and also included parts of present-day Ware, Brantley, and Charlton Counties, which were re-designated in the nineteenth century.

Also under the 1777 state constitution, Glynn County and Camden County had limited and restricted representation in the new patriotic Georgia government due to their extreme "state of alarm" throughout the war. Between 1776 and 1778 Camden County saw the construction of numerous forts, three failed American campaigns against the British at St. Augustine, and numerous depredations by raiders of various allegiance. One of the most notorious of these raiders was Daniel McGirth. A significant loyalist faction existed in Camden County, headed by the brothers of Royal Governor James Wright, Charles and German Wright. They built a fort on the St. Marys River in 1775 to protect their lands and chattel during the war after repeated attacks by patriot banditti. Wright's Fort became a rendezvous for a group of loyalists called the "Florida Rangers". Two skirmishes were fought by Loyalist and Continental forces over Wright's Fort, and both times American troops failed to rout the Loyalists from the area. Finally, retreating British soldiers burned it down in 1778. The Americans rebuilt it when they invaded East Florida, and then burned it down to prevent it falling into enemy hands. The archaeological site was rediscovered in 1975.

The primary economic enterprise of the county was rice planting, particularly along the Satilla River. Sea Island cotton was grown on Cumberland Island, and short-staple cotton was grown on the mainland along with sugar cane. Various forest products including turpentine and timber were produced, mainly for consumption in the naval industry and the West Indies. Camden County also served as a hub of backcountry trade with American settlers and various Indian groups, and as a shipyard and shipping center centered around the town of St. Marys. The land in Camden County was owned by fewer than 300 people throughout the colonial and antebellum eras. Most of the white population worked in trades or as tenant farmers, while nearly all black residents were slaves. Until the 1840s (and increasingly strict black codes), Camden County had a small population of free black workers, mainly involved in day labor or maritime industry.

Camden County was the site of many trading posts with the Native Americans, who by the late eighteenth and early nineteenth centuries consisted mainly of people of the Creek Nation. From America's earliest years and even after Indian Removal in the 1830s, the county was a site of significant conflict between settlers and Indians, leading to a small series of local Indian wars, and displacement of both Indian and local American refugees. An important step towards establishing boundaries in the Early Federal period came with the Treaty of Colerain which was signed on June 29, 1796 on the St. Marys between United States agents and the Creeks.

On January 15, 1815, British troops led by Sir George Cockburn landed on Cumberland Island. Their goal was to attack the fort at Point Peter. They quickly overwhelmed the small American forced and took Ft. Point Peter easily. After the skirmish, British soldiers occupied the county through February. They raided the town of St. Marys, as well as many plantations and smaller settlements. Although New Orleans was the last major battle of the war, the skirmish at Point Peter happened even later, almost a month after the Treaty of Ghent had been signed. The British occupation of Camden County led to the liberation of an estimated 1,485 slaves from Georgia and Florida.

Camden County was on an international border until the Adams–Onís Treaty of 1819 between the United States and Spain, making the Florida provinces American territory.

The Civil War and Reconstruction

At the beginning of the Civil War, the population was 5,482 of which 1,721 were white. During the war, many of the county's civilians moved farther inland, particularly to Centerville and Trader's Hill on the St. Marys River in Charlton County. The inhabitant's fears were realized when the town of St. Marys was attacked by United States Navy. At least one federal party to "carry off" slaves was met by armed resistance on White Oak Creek off the Satilla River.

Camden County land fell under Sherman's Special Field Order No. 15. which dictated the distribution of parcels of land to freedmen. However, by 1868 Camden County's freedmen found themselves dispossessed of land they had lived and worked on since emancipation or earlier. Confiscated lands were returned to former landowners. During the first years of reconstruction, Republican candidates and many local blacks were able to gain political victories. The first Democratic victory in the county after the war went to Ray Tompkins. This signaled a return to a white political majority and the end of the Reconstruction Era concurrent with the statewide Democratic victory in 1870.

Earlier plans for railways in the area dated back to the 1830s, but construction was never begun. In 1893, Florida Central and Peninsular Railroad built a Savannah-Jacksonville line through Camden County. In 1923 the county seat of Camden County was moved from St. Marys to Woodbine, a reflection of the shift from the water transportation to railways. In 1927 U.S. Route 17 was constructed through Woodbine and Kingsland.

From 1917 to 1937 a pogy plant producing oil for Procter & Gamble and fertilizer for the Southern Fertilizer and Chemical Company was one of the major economic activities of the area. The layoffs from the pogy plant found relief when the Gilman Paper Company came to the county in 1939. The company was sold to Durango Paper Co. in 1999, and went out of business in 2002, resulting in 900 workers losing their jobs.

In 1965, Thiokol Chemical launched a 13-foot (4.0 m)-diameter, 3,000,000-pound-force (13,000 kN)-thrust rocket from their chemical plant in the eastern part of the county. On February 3, 1971, a fire and explosion occurred at the plant, located 12 miles southeast of Woodbine. The industrial accident killed 29 workers and seriously injured 50 others.

During World War II, the Georgia State Guard and local Home Guard held bases on Cumberland Island. The island and surrounding waters were also patrolled by the United States Coast Guard. The U.S. Army began to acquire land south of Crooked River in 1954 to build a military ocean terminal to ship ammunition in case of a national emergency. In November 1976 the area of Kings Bay was selected for a submarine base. Soon afterward, the first Navy personnel arrived in the Kings Bay area and started preparations for the orderly transfer of property from the Army to the Navy. Naval Submarine Base Kings Bay not only occupies the former Army terminal land, but several thousand additional acres. Camden County's population grew enormously after the military took an interest in the area, and during the 1980s was the fourth fastest growing county in the United States.

In 2012, the Camden County Joint Development Authority began considering developing a spaceport for both horizontal and vertical spacecraft operations. Options included moving the St. Marys' airport to the Atlantic coastal site which had previously been used for a rocket launch in 1965. In 2013, the authority contracted for an Environmental Impact Statement to be completed on 200 acres (81 ha) of authority-owned land, part of a larger 4,200 acres (1,700 ha) site, in order to build a commercial launch site. As of September 2014[update], the County was investigating options to purchase 11,000 acres (4,500 ha) of land from landowners who own the land formerly occupied by Thiokol Chemical and Bayer CropScience at Harrietts Bluff. If an agreement is reached with landowners, then another 18-month-long environmental impact process could begin on the larger parcel of land. Georgia state legislators would likely offer tax incentives for commercial development in the project. If development were to proceed, the earliest launch possible would be in 2018.

In June 2015, the Camden board decided to formally advance the Spaceport Camden project by initiating an FAA Environmental Impact Assessment of the 4000+ acre facility.

Historic towns which were formerly inhabited but are currently abandoned.

All content from Kiddle encyclopedia articles (including the article images and facts) can be freely used under Attribution-ShareAlike license, unless stated otherwise. Cite this article:
Camden County, Georgia Facts for Kids. Kiddle Encyclopedia.