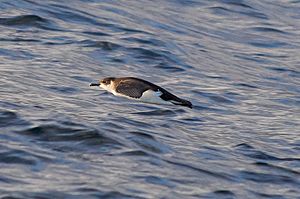 The little shearwater (Puffinus assimilis) is a small shearwater in the petrel family Procellariidae. Despite the generic name, it is unrelated to the puffins, which are auks, the only similarity being that they are both burrow-nesting seabirds.

This shearwater has the typically "shearing" flight of the genus, dipping from side to side on stiff wings with few beats, the wingtips almost touching the water, though in light winds it has a more flapping flight than that of its larger relatives. In flight it looks cross-shaped, with its wings held at right angles to the body, its colouration changing from black to white as the black upperparts and white underparts are alternately exposed as it travels low over the sea.

At 25–30 cm (9.8–11.8 in) in length with a 58–67 cm (23–26 in) wingspan, it is like a small Manx shearwater but has proportionally shorter and broader wings, with a pale area on the inner flight feathers. Its bill is more slender than that of Manx, and its dark eye stands out against the surrounding white area.

It breeds in colonies on islands and coastal cliffs, nesting in burrows which are only visited at night to avoid predation by large gulls.

This is a gregarious species, which can be seen in large numbers from boats or headlands, especially on migration in autumn. It feeds on fish and molluscs. It does not follow boats. It is silent at sea, but at night the breeding colonies are alive with raucous cackling calls.

It nests in cavities located in grassy fields or in those found among rocks.

The little shearwater usually produces a clutch of one clear white egg, measuring around 51 by 35 millimetres (2.0 by 1.4 in). The egg is incubated for 52 to 58 days by both sexes.

All content from Kiddle encyclopedia articles (including the article images and facts) can be freely used under Attribution-ShareAlike license, unless stated otherwise. Cite this article:
Little shearwater Facts for Kids. Kiddle Encyclopedia.