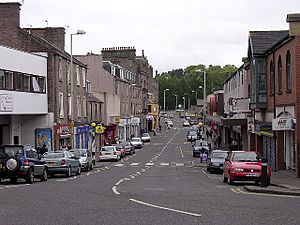 Lochee is an area in the west of Dundee, Scotland. Until the 19th century, it was a separate town, but was eventually surrounded by the expanding Dundee. It is notable for being home to Camperdown Works, which was the largest jute production site in the world.

'Lochee' originally referred to the area in which weavers' cottages were situated at the burn which flowed through Balgay Lochee; thus, they were at the eye of the loch or Loch E'e, which eventually became Lochee. It is believed this site is close to where Myrekirk stands today. Indeed, John Ainslie's map of 1794 makes reference to 'Locheye' on the north and south banks of the burn. However, G. Taylor and A. Skinner's 'Survey and maps of the roads of North Britain or Scotland' in 1776 makes reference to 'Lochee'.

When the loch was drained by the Duncans in the 15th century they offered crofting tenancies along the burn. One of the tenancies went to a Dutchman, James Cox and his family. After a change of name and with a reputation for quality linen, the Cox family eventually set up as linen merchants in 1700.

By 1760 the firm had 300 weavers and after using steam power and moving into the jute industry the family built Camperdown Works in 1864, said to be the largest factory in the world, with over 5,000 employees. Cox’s Stack, the 86 m (282 ft) high campanile-style factory chimney designed by local architect James MacLaren, survives. Lochee became a company town with 2 railway stations, police force, fire service, schools, swimming pool, casino, library, washhouse and several churches.

Lochee is well known for being the home of Dundee's biggest ever gang, 'The Lochee Fleet' who were notorious in Dundee's gang culture throughout the 70's and 90's.

Many immigrants were attracted to the area by the prospect of employment in the city's jute mills. By 1855, there were 14,000 Irish immigrants in Dundee, most of whom stayed in Lochee, or 'Little Tipperary' as it would come to be known. In 1904, the Lochee Harp football club was formed by Lochee Irishmen as a means of recreation for the poor immigrants; the club still plays to this day.

All content from Kiddle encyclopedia articles (including the article images and facts) can be freely used under Attribution-ShareAlike license, unless stated otherwise. Cite this article:
Lochee Facts for Kids. Kiddle Encyclopedia.