The Locomobile Company of America 1905 logo 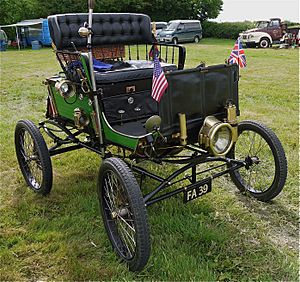 The Locomobile Company of America was a company founded in 1899 by John B. Walker. He and his partner Amzi L. Barber bought the rights to manufacture the steam car built by the Stanley brothers. They called the car the Locomobile. In 1904 the company began producing gasoline-powered cars and continued in business until 1929.

Francis E. Stanley and Freelan O. Stanley had invented a steam car. In 1899 they purchased a bicycle factory in Watertown, Massachusetts and began building their cars. John B. Walker, the owner of Cosmopolitan magazine, offered to buy half the company. The Stanley brothers said no. When Walker came back a few weeks later he offered to buy the whole car company. The brothers thought about it and set the price at $250,000 USD. The set the price high enough they thought nobody would pay it. But Walker did and the two Stanley brothers stayed on to run the factory. Walker's partner was Amzi L. Barber. They called the new company Locomobile.

Within a few months Walker and Barber had a disagreement and split the company. Walker took his half and formed a new company in Tarrytown, New York. He called his car 'the Mobile'; a Stanley Steamer with his logo on it. With poor sales Walker closed his company in 1902. Barber kept the Locomobile name and sold 5,200 cars by 1902. The Locomobile steam cars were a little difficult to operate and sometimes had fires. They could only go about 20 miles before needing water. They needed to be warmed up for about 30 minutes before they could be driven. By 1904 only about 200 cars were sold. Locomobile sold the patents and the design for their steam car back to the Stanley brothers. By 1904 Locomobile had switched to making gasoline cars.

At about the same time Locomobile switched over to making gasoline powered cars, Barber left the business. His son-in-law, J.J. Albright, took over as company president. Inventor Andrew Riker became the lead designer and was responsible for the new gasoline engines.

The 1904 5-passenger touring car used an Inline-four engine that was water-cooled engine that produced about 16 horsepower. At the time it cost $4,500. In 1905 Locomobile entered cars in Auto racing. It was in 1908 they won the Vanderbilt Cup. A car that won a race gained an excellent reputation. They advertised the Locomobile as “Easily the Best Built Car in America.” They continued to improve their car. In 1922 Locomobile was acquired by the Durant Motor Company. But their cars continued to be made under the name Locomobile. They continued to build their reputation for making high performance luxury cars. In 1929 the company fell victim to the Great Depression and closed its doors.

All content from Kiddle encyclopedia articles (including the article images and facts) can be freely used under Attribution-ShareAlike license, unless stated otherwise. Cite this article:
Locomobile Company of America Facts for Kids. Kiddle Encyclopedia.