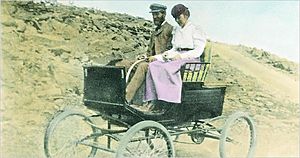 F.O. Stanley and his wife, Flora, drove the first automobile to the top of Mount Washington, New Hampshire.

Freelan Oscar Stanley (1849 – 1940), was an American educator, inventor and manufacturer. He left teaching to join his twin brother Francis Edgar Stanley in the photographic dry plate business. After selling the business, the two brothers invented and manufactured the Stanley Steamer car. They were pioneers in the use of steam engines to power cars.

Freelan O. Stanley and his twin brother Francis E. Stanley were born on 1 June 1849 in Kingsfield, Maine. Their parents were Solomon and Apphia (French) Stanley. Solomon Stanley was both a farmer and a teacher. Freelan and his brother Francis graduated from Farmington State Normal School in Farmington, Maine. The school is now the University of Maine at Farmington. Freelan became a teacher and taught at Andover, Lisbon and Farmington, Maine. He later became principal of the high school at Mechanic Falls, Maine. In 1876 he met and married Flora Tileston.

In 1896 Freelan and his brother Francis visited the Brockton County Fair. They saw a steam car and decided to build one themselves. In 1897 the two brothers began making steam-powered cars. Their steam cars had a much lighter boiler and a lighter steam engine than the rest. They were soon making about 200 cars a year. In 1899 they purchased a bicycle factory in Watertown and began building their cars. They then sold their car company to John B. Walker and Amzi L. Barber for $250,000 USD. With it they sold the rights to their car designs. The sale had a clause that the two Stanley brothers could not build and sell cars for two years. The Stanley brothers broke the clause and had to give their new design to the company Walker and Barber formed, the Locomobile Company of America. In 1901 Francis and Freelan Stanley formed a new car company, the Stanley Motor Carriage Company.

The cars they produced, called Stanley Steamers, had many advantages. The cost was $650. That was $300 less than the cost of a Ford Model T. The cars were very quiet and only made hissing sounds from the boiler. They had no transmission because there was no need to change gears as there was with gasoline-powered cars. Their cars began making news. In 1899, Freelan and his wife Flora drove one of these cars to the top of Mount Washington in New Hampshire, the highest peak in the northeastern United States. The ascent took more than two hours and was notable as being the first time a car had climbed the 7.6 miles (12.2 km) long Mount Washington Carriage Road. In 1906 a Stanley Steamer broke the land speed record at 127 miles per hour on a beach in Florida.

In business, the twins looked exactly alike and dressed the same. They even trimmed their beards the same. People they worked with said the only way to tell them apart was each had a different reaction when you told him a joke. As other car companies moved from steam to gasoline power, their Stanley Steamer became the most popular steam powered car. As the internal combustion engine designs improved, however, steam and electric cars lost much of their popularity. Finally, the numbers of cars sold went down to less than 600 a year in 1918. That year the Stanley brothers sold the company to Prescott Warren, a Chicago businessman. both brothers retired. A few months later, while he was driving home from a trip to Maine, Francis' car ran off the road. Francis was driving a new 1918 Model 735 Stanley Steamer. He died in the accident, July 21, 1918.

In 1903 Freelan came down with tuberculosis and was given less than a year to live. He and his wife Flora came to Colorado to try to improve his health. The couple fell in love with Estes Park, Colorado. Stanley's health began to improve and in 1906 he began building a large hotel. The site had spectacular views of Rocky Mountain National Park. He opened his hotel in 1909. It had luxuries (for that time) of telephones, electricity and indoor plumbing. He had a fleet of Stanley Steamers to bring guests to his hotel, named The Stanley Hotel. The Stanley Hotel was the inspiration behind Stephen King's book The Shining. King wrote much of the book while he was a guest in room 217. Other famous guests of the hotel include Theodore Roosevelt, Molly Brown and the Emperor of Japan.

Stanley made a number of contributions to Estes Park. He built a hydroelectric plant to provide electricity to the town. He gave land for parks, a fairground and he improved roads in the area. He spent every summer in Estes Park for 37 years. He died on October 2, 1940 at age 91.

All content from Kiddle encyclopedia articles (including the article images and facts) can be freely used under Attribution-ShareAlike license, unless stated otherwise. Cite this article:
Freelan Oscar Stanley Facts for Kids. Kiddle Encyclopedia.