Kingfield is a town in Franklin County, Maine, United States. The population was 960 at the 2020 census. Kingfield, the primary village in the town, is a census-designated place.

Kingfield is the principal gateway to Sugarloaf, a major ski resort, and is headquarters to Maine Huts and Trails. 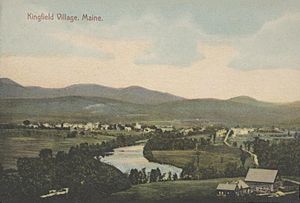 The history of Kingfield is one of falling bridges, opening and closing roads, numerous floods and fires, and citizens and generosity, leadership, and foresight. The first white men recorded to have visited the present location of Kingfield were John W. Dutton and Nathaniel Kimball in 1805. The following year, Dutton and Kimball, after spending time the previous year hunting in the area, returned to the area with their families and formed a settlement at the foot of Vose Mountain.

In 1807, William King (later to be Maine’s first Governor), in partnership with three others, purchased townships 1, 2, and 3 of Bingham’s West Kennebec Purchase. Today, those townships are known as Concord, Lexington, and Kingfield. The Stanley family settled in Kingfield at this time. Salomon Stanley came as William King’s personal envoy in 1807. He and his descendents were business, political, social, and religious leaders of the Town. As farmers and businessmen, they also served as town clerks, school teachers, school superintendent, and selectmen. The twin sons, Francis Edgar (F.E.) and Freelan Oscar (F.O.) became famous as manufacturers of the Stanley Dry Plate, bought in 1903 by Eastman Kodak, and the Stanley Steamer automobile, manufactured from 1902-1924. Their sister, Chansonetta, became a photographer renowned for her portraits of local rural life of the turn of the century. (See the Stanley Museum website at stanleymuseum.org for more information). Ten years after the first settlement of the area (1816), Kingfield was incorporated as the 210th town in the Maine District of the Commonwealth of Massachusetts. By this time, much of the land was being cleared along the rivers, in the Tufts Pond area, and at the foot of Voss Mountain. The principal crops at the time were potatoes, corn, and wheat. Most of the farms also had small orchards growing apples and pears. The first industry was a sawmill located on the bank of the Carrabassett River to supply the building needs of the new community.

As the population grew so did the extent of services available to the town. By the nineteenth century there were several stores in town, at least one shoemaker, a resident physician, several sawmills, a clover mill, carding mill, tannery, flour mill, and a rake factory. Some of the major issues concerning the voters of the Town during the first half-century were the separation of Maine from Massachusetts (strongly in favor), the removal of Kingfield from Somerset County (opposed), dealing with the town paupers, planning Kingfield Depot and accepting new streets, roads, and bridges. The bridge across the mill pond to what is now Maple Street was a source of constant debate. Another concern was the running at-large (in the highway and on the common) of horses, cattle, and hogs. Farmington & Carrabasset Railroad Company proposed a two-foot railway in 1883 but lost out to the Franklin & Kingfield Depot. Megantic Railroad for funding in an August 11 vote at Winter Hall in Kingfield. The line was to start at either Farmington or South Strong and go over a route that included New Vineyard and New Portland and Kingfield. It was never built. There’s an interesting history of the Franklin County two-foot railroads here. The Town’s population reached its peak of 1,024 in 1930.

The decline of industrial activities in Kingfield followed that of the nation during the Depression. The narrow gauge railroad discontinued operations in the summer of 1932, started up again in April 1933, and finally ceased operation in the summer of 1936. The competition from highway vehicles and the decline in freight led to its discontinuance. A fire of January 29, 1933, destroyed B.M. Lander’s sawmill on the bank of the mill pond, W.S. Safford’s small shop, and the Spinning Boss Mill of Charles E. Chamberlain (the mill begun by J.B. Mayo in 1880.) None of these were rebuilt. The “Upper Mill”, built by Cliff Huse in 1912, became part of Wins Spool and Bobbin and was used in conjunction with their downtown mill until the latter part of the 1950s. In the early fifties, several of the local sports enthusiasts became interested in skiing. Through the enthusiasms, planning, and leadership of local residents – mainly Amos Winter, Jr, with “Stub” Taylor, Fred Morrison, Mickey Durrell, and Austin and Odlin Thompson – the Sugarloaf Mountain Ski Development got its beginning. Sugarloaf has since grown to be a large, commercial corporation and now forms a major part of Kingfield’s economic base. The recreational industry has provided the impetus to reverse the declining population and economy of Kingfield. The construction of Nestle’s Poland Spring bottling plant in 2007-2008 ushers in a new era for Kingfield. This is expected to lead to growth in other areas. Nestled in the woods off Route 27, the plant cannot be seen from the highway.

This climatic region is typified by large seasonal temperature differences, with warm to hot (and often humid) summers and cold (sometimes severely cold) winters. According to the Köppen Climate Classification system, Kingfield has a humid continental climate, abbreviated "Dfb" on climate maps.

There were 447 households, of which 25.1% had children under the age of 18 living with them, 47.9% were married couples living together, 6.9% had a female householder with no husband present, 5.1% had a male householder with no wife present, and 40.0% were non-families. 30.9% of all households were made up of individuals, and 12.3% had someone living alone who was 65 years of age or older. The average household size was 2.23 and the average family size was 2.78.

Schools in the district include Kingfield Elementary School for students from Kindergarten to grade 8.

All content from Kiddle encyclopedia articles (including the article images and facts) can be freely used under Attribution-ShareAlike license, unless stated otherwise. Cite this article:
Kingfield, Maine Facts for Kids. Kiddle Encyclopedia.