Long Ago and Far Away (TV series) facts for kids 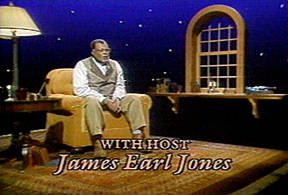 An opening screenshot from Long Ago and Far Away

Long Ago and Far Away is a television series that aired on PBS Television from January 28, 1989 to December 5, 1992. It was created by WGBH, a public television broadcast service located in Boston, Massachusetts. WGBH is a member of PBS, which allowed for the series to be viewed on various other PBS stations.

Each episode began with host James Earl Jones sitting in a chair in a room with a table, lamp, and window. The walls were blue with white dots in order to make it appear as if the room was sitting out in space or the night sky.

James Earl Jones talks during the short opening section, then acts as narrator for the balance of an episode. The series presents stories based on traditional folk and fairy tales. A number of presentation methods were used to tell these stories, with stop motion animation, live-action or traditional animation being used depending on the episode.

After the last episode aired, the show went into reruns until September 4, 1994.

All content from Kiddle encyclopedia articles (including the article images and facts) can be freely used under Attribution-ShareAlike license, unless stated otherwise. Cite this article:
Long Ago and Far Away (TV series) Facts for Kids. Kiddle Encyclopedia.