Long Key is an island in the middle Florida Keys. Long Key was called Cayo Víbora (Rattlesnake Key) by early Spanish explorers, a reference to the shape of the island, which resembles a snake with its jaws open, rather than to its denizens. The city of Layton is located on Long Key. The 965-acre (3.9 km2) state park (3.9 km²) was dedicated October 1, 1969.

U.S. 1 (or the Overseas Highway) crosses the key at approximately mile markers 65.5--71, between Fiesta Key and Conch Key. It is the home of Long Key State Park, a favorite of campers and nature lovers, the camp sites are on the beach but the proximity of US1 makes it noisy. It is smaller and less developed than the neighboring incorporated village of Islamorada to the northeast and city of Marathon to the southwest. 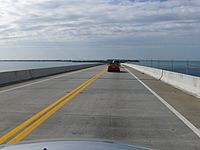 Bridge over channel #5, connecting Long Key with Craig Key. The eastern end of Long and Fiesta Keys are in the background.

All content from Kiddle encyclopedia articles (including the article images and facts) can be freely used under Attribution-ShareAlike license, unless stated otherwise. Cite this article:
Long Key Facts for Kids. Kiddle Encyclopedia.