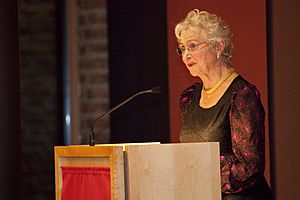 Lorna Ann Casselton CBE FRS (18 July 1938 – 14 February 2014) was a British academic and biologist. She was Professor Emeritus of Fungal Genetics in the Department of Plant Science at the University of Oxford. She was also the Foreign Secretary for The Royal Society from 2006 until 2011.

Casselton was born in Rochford, Essex. She was married to Peter Casselton until their divorce. In 1981, she married William Joseph Dennis "Bill" Tollett.

All content from Kiddle encyclopedia articles (including the article images and facts) can be freely used under Attribution-ShareAlike license, unless stated otherwise. Cite this article:
Lorna Casselton Facts for Kids. Kiddle Encyclopedia.