Lotay Tshering (born 10 May 1969) is a Bhutanese politician and doctor who is the current Prime Minister of Bhutan, in office since 7 November 2018. He has also been the president of Druk Nyamrup Tshogpa since 14 May 2018.

Tshering was born on 10 May 1969, in a humble family. He hails from Dalukha village, Mewang Gewog, Thimpu.

He received his early education from Punakha High School and graduated from Sherubtse College. He graduated from Mymensingh Medical College under the University of Dhaka, Bangladesh and received a degree of MBBS in 2001. He completed his post-graduation in surgery from the Bangabandhu Sheikh Mujib Medical University in Dhaka, Bangladesh. In 2007, he studied Urology at the Medical College of Wisconsin, the USA, under his World Health Organisation fellowship. Upon his return to Bhutan, he was the only practicing trained urologist in his country. In 2010, he obtained a fellowship in Endourology at Singapore General Hospital, Singapore, and Okayama University, Japan. He received a Master of Business Administration degree from University of Canberra, Australia in 2014.

Tshering is married to a doctor, Ugyen Dema. The couple has one daughter. During his tenure in Mongar Regional Referral Hospital, he adopted one girl and one boy.

After the payment of about Nu. 6.2 million to the Royal Civil Service Commission, he resigned from the JDWNRH as a urologist to join politics in 2013.

Tshering contested the 2013 National Assembly Election but his party was knocked out in the primary round.

On 14 May 2018, Tshering received 1,155 votes and was elected as the president of the Druk Nyamrup Tshogpa (DNT) just five months before the Third National Assembly Election. 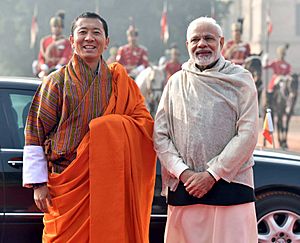 Narendra Modi with the Lotay Tshering, at Rashtrapati Bhavan, in New Delhi on December 28, 2018

On 7 November 2018, he replaced Tshering Tobgay and was sworn in as 3rd democratically elected Prime Minister of Bhutan.

On 27 December 2018, he arrived in India (three-day visit) on his first foreign trip after assuming the office.

All content from Kiddle encyclopedia articles (including the article images and facts) can be freely used under Attribution-ShareAlike license, unless stated otherwise. Cite this article:
Lotay Tshering Facts for Kids. Kiddle Encyclopedia.