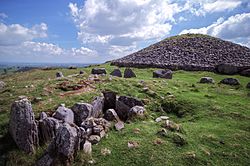 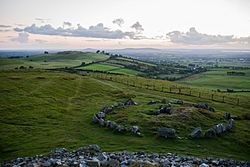 View from the top of one of the tombs

Loughcrew or Lough Crew (Irish: Loch Craobh, meaning lake of the tree) is an area of great historical importance near Oldcastle, County Meath, Ireland. It is home to a group of megalithic tombs dating back to the 4th millennium BC, which sit on top of a range of hills. The hills and tombs are together known as Slieve na Calliagh (Sliabh na Caillí) and are the highest point in Meath. It is deemed one of the four main passage tomb sites in Ireland and is a protected National Monument. The area is also home to the Loughcrew Estate, from which it is named. 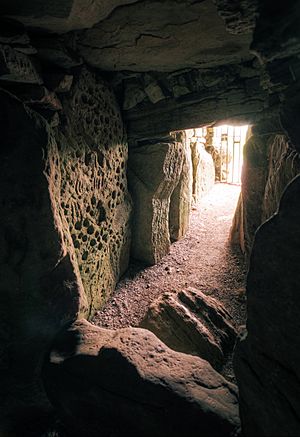 The inner passage of Cairn T

Loughcrew is one of the four main passage tomb sites in Ireland (the others are Brú na Bóinne, Carrowkeel and Carrowmore). The site is spread across four hilltops: Carnbane East, Carnbane West, Carrickbrack and Patrickstown. These hills and the tombs themselves are together known as Slieve na Calliagh or Sliabh na Caillí, meaning "mountain of the Cailleach", the divine hag of Irish mythology. Legend has it that the monuments were created when a giant hag, striding across the land, dropped her cargo of large stones from her apron.

No comprehensive dating programme has been conducted there, but the monuments are estimated to date from about 3300 BC. The sites consist of cruciform chambers covered in most instances by a mound. A unique style of megalithic petroglyphs are seen there, including lozenge shapes, leaf shapes, as well as circles, some surrounded by radiating lines. The orthostats and structural stones of the monuments tend to be from local green gritstone, which was soft enough to carve. This also makes them vulnerable to vandalism. Irish folklore holds that it is bad luck to damage or disrespect such tombs and that doing so could bring a curse.

In 1980 Irish-American researcher Martin Brennan discovered that Cairn T in Carnbane East is directed to receive the beams of the rising sun on the spring and autumnal equinox - the light shining down the passage and illuminating the art on the backstone. Brennan also discovered alignments in Cairn L (53°44′36″N 7°08′03″W﻿ / ﻿53.743299°N 7.134040°W﻿ / 53.743299; -7.134040), Knowth, and Dowth in the Boyne Valley. The Cairn T alignment is similar to the well-known illumination at the passage tomb at Brú na Bóinne (Newgrange), which is aligned to catch the rays of the winter solstice sunrise.

There are about twenty-three tombs in the Loughcrew complex in addition to Cairn L and Cairn T, along with additional archeological sites.

In more recent centuries Loughcrew became the seat of a branch of the Norman-Irish Plunkett family, whose most famous member became the martyred St Oliver Plunkett. The family church stands in the grounds of Loughcrew Gardens. With its barren isolated location, Sliabh na Caillí became a critical meeting point throughout the Penal Laws for Roman Catholics. Even though the woods are now gone an excellent example of a Mass Rock can still be seen on the top of Sliabh na Caillí today. The Plunketts were involved in running the Irish Confederacy of the 1640s and were dispossessed in the Cromwellian Settlement of 1652. Their estate at Loughcrew was assigned by Sir William Petty to the Naper Family c.1655. The Napers are descended from Sir Robert Napier who was Chief Baron of the Exchequer of Ireland in 1593.

The Napers built an extensive estate of some 180,000 acres (730 km²) in north Meath in the subsequent centuries which mirrored that developed by their neighbouring Cromwellians, the Taylors of Headfort. Following a third and devastating fire, in 1964, the three Naper sons went to court and requested that the state allow the family trust to be broken up and the estate divided between the three sons. Subsequently the house and gardens have been restored by Charles and Emily Naper, who open the gardens and run an annual opera festival.

All content from Kiddle encyclopedia articles (including the article images and facts) can be freely used under Attribution-ShareAlike license, unless stated otherwise. Cite this article:
Loughcrew Facts for Kids. Kiddle Encyclopedia.