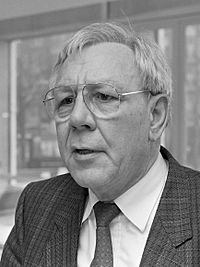 Louis Alphonse van Gasteren (20 November 1922 – 10 May 2016) was a Dutch movie director, movie producer, and artist. He was born in Amsterdam. He was known for his movies Hans: Het Leven Voor De Dood (1983) and De prijs van overleven (2003). He won two Golden Calf Awards. His career began in the 1950s. At the time of his death, he was the oldest active filmmaker in the Netherlands.

All content from Kiddle encyclopedia articles (including the article images and facts) can be freely used under Attribution-ShareAlike license, unless stated otherwise. Cite this article:
Louis van Gasteren Facts for Kids. Kiddle Encyclopedia.