Lusk (Irish: Lusca) is a small town in Ireland, 23 km (14 mi) north of Dublin city centre. The name "Lusk" is said to date back to Saint MacCullin, who founded a church there c. 450. Oral tradition suggests MacCullin may have either lived in or been buried in a cave and that the name "Lusk" derives from an old Irish word Lusca meaning 'cave' or 'underground chamber'. MacCullin died in c. 497 and his feast day was 6 September. The area was known as Bregia in pre-Christian times and was said to have been birthplace to Cú Chulainn's wife, Emer in Irish mythology.

The railway station of Rush & Lusk is about 2km east and is shared with the coastal settlement of Rush.

The settlement of Lusk has been associated with St. MacCullin since c. AD 450. The place also had associations with St. Maur, who nowadays connects with Rush (RosEo). The ruins of St. Maur's original church, or more likely its later replacement, are at the top of Whitestown hill, firmly in the parish of Rush. Lusk was plundered and burned several times in the 8th and 9th centuries by marauding Vikings, who eventually built a permanent settlement at Dubh Linn now Dublin.

The only tangible remnant of the early Christian foundation at Lusk is the round tower. It stands 27 m high (originally some 32 m high) which retains its original conical cap or so it seems, as the modern trap-door onto the rooftop suggests otherwise. Inside are nine 'floors' including the basement, which are likely to be due to unrecorded 'improvements' in or after the Middle Ages. The flat-headed doorway, which originally would have been some 15 ft (4.6 m) above the ground is now less than 1 m above ground level. The tower either sunk or was buried some 4 m over the centuries. The Round Tower is adjacent to a Norman square tower built against it in the 15th century. This building has three matching towers at its corners and is beautifully represented by the 18th-century picture below. The square tower holds several medieval tombs including that of James Bermingham (1527) and the double-effigy tomb of Christopher Barnewall and his wife Marion Sherle (1589). The Church of Ireland church dates from 1847 by Joseph Welland, and was designed in an Early English Gothic style. While standing on the right side of the castle looking up one of the bricks in the building has a stone image of St. Macullin's face. 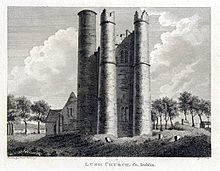 Fingal is the name given to that part of present-day North County Dublin bounded by the Tolka River to the south and the Delvin River to the north. Fingal is considerably older than Dublin City, which was established by the Norsemen c. 900 AD around the 'dubh linn' or black pool. Before Christendom and St. MacCullin, the area was the Celtic "Bregia", birthplace of Cú Chullain's wife, Emer whose clan resided in or near what we now know as Lusk.

The round tower at Lusk was built by 9th-century Christians in an attempt to foil the Vikings, who were interested not only in the easy pickings but also the inhabitants themselves as a source of slave labour. As an interesting aside, a world-famous pipe band formed in 1910 and still as strong is named the Black Raven Pipe Band. The black raven was very special to the Vikings. [See Iceland Daughter of Fire; Katharine Scherman 1976]. The entrance door to Lusk Round Tower, as with all such towers, was originally 4–5 m above ground. Ladders were used to reach the entrance and then pulled up. (Refer to similar round towers at Glendalough, Ardmore, and Clonmacnoise.)

Lusca Irish Wine named after the Irish for Lusk, by Llewellyns Orchard, is one of the few Irish Wine producer using grapes grown in Ireland.

On 26 May 2005 there was an attempted armed robbery of Lusk Post office, Main St. During this attempted robbery two gang members were shot dead by Gardaí. The total incident lasted 20 seconds. In 2007 a third gang member was given a 10-year jail sentence for his role in the deadly raid . 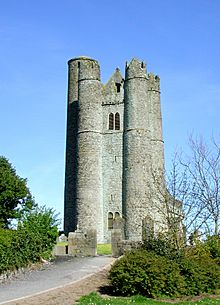 Lusk is a village and a parish. The population of the village has quadrupled since the millennium with new people coming from other parts of the EU, Africa, South America and many parts of Asia. According to the Central Statistical Office, 62% of all private dwellings in Lusk were built in the five years between 2001 and 2006. Census figures for the same period show a population boom from c. 2,500, to over 5,200. During most of the 20th century, the population remained fairly static. Census returns for 1901 and 1911 show a population boom from about 300 to 600. In the early 1950s, the Survey Gazetteer of The British Isles quotes a population of 513 for the village. Due to massive emigration in the 1950s and 1960s the population declined. In the mid-1950s for instance, the total number of children in the old NS, boys and girls, hovered around 120. The present NS opened in 1956 with about that number.

There are four national schools in the area: Lusk NS, Hedgestown NS, Corduff NS and Rush and Lusk Educate Together. In August 2013 these were complemented by a secondary-level education institute, Lusk Community College.

Lusk Community Council Ltd (LCC) was set up to look after the village and liaise with local government and councillors. LCC is a voluntary organisation whose responsibility has been to manage the Carnegie Library hall and the Old Church hall by the round tower. They also run the St Patrick’s Day parade each year.

The village accommodates many different social clubs and activities:

Lusk is home to a number road motorbike races, with major annual motorcycle road races, such as the Skerries 100 and Killalane Road Races, in the area. A well known road racer from the area, Martin Finnegan was killed in a tragic accidents at the Tandragee 100. A memorial to Martin Finnegan was dedicated close to the grounds of the parish church. Also in his memory the Martin Finnegan Trophy is awarded to the fastest lap by an Irishman at the Isle of Man TT.

All content from Kiddle encyclopedia articles (including the article images and facts) can be freely used under Attribution-ShareAlike license, unless stated otherwise. Cite this article:
Lusk, Dublin Facts for Kids. Kiddle Encyclopedia.