Rush (Irish: Ros Eó, meaning peninsula of the yew trees officially (incorrectly named) An Ros) is a small seaside town in Fingal, County Dublin, Ireland. It lies on the Irish Sea coast between Skerries and Lusk, on the R128 regional road. It had a population at the 2011 census of 9,231. Rush is also a parish in the Fingal North deanery of the Roman Catholic Archdiocese of Dublin.

Rush was once viewed as the heart of market gardening in Leinster and many people were employed in agriculture. Nowadays, however, horticulture and agriculture have been superseded by Rush's increasing role as a "commuter belt" town.

There is evidence of settlement in the Rush area dating back to Neolithic times. Flint tools have been found in the area and there is a passage grave and cist located off the Skerries Road on the headland to the north of North Beach.

A giant promontory fort is located on the headland of Drumanagh, north of Rush. It is surrounded on three sides by cliffs and a large rampart encloses the fourth side. The site has not been excavated, but it is thought that it dates back to the Bronze or Iron age.

An article in The Sunday Times in January 1996 claimed that Roman coins, brooches and copper ingots were found at the site and that there was "clear evidence...of a Roman coastal fort of up to 40 acres...a significant Roman beachhead, built to support military campaigns in the 1st and 2nd centuries A.D.". This claim is disputed by many archaeologists who see this simply as evidence of trade between Ireland and the Romans. The artifacts were illegally excavated after being discovered with metal detectors, so they have not been available for further study.

According to Barry Raftery of UCD Drumanagh "may well have been (and probably was) a major trading station linking Ireland and Roman Britain. It was probably populated with a mixture of Irish, Romano-British, Gallo-Roman, and others, doubtless including a few genuine Romans as well". Legal disputes with the land owner have meant that further excavations have not been carried out to be able to settle the debate. 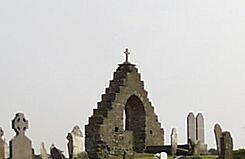 The ruins of the original St. Maur's chapel lie in Whitestown cemetery, about a mile west of the centre of Rush. These date back to Anglo-Norman times and are named after Saint Maurus, a followers of St. Benedict. There is a legend connected with these ruins that some French navigators, who may have been crusaders, got caught in a storm. They made a vow to St. Maur that if they survived they would build a chapel in his honour on the first point of land they reached. They subsequently landed at Rogerstown and built a chapel there in his honour. The area became known as Knightstown and later Whitestown.

In 1776, a church was built closer to the centre of Rush to replace the old chapel. It was also dedicated to St. Maur and is one of the earliest examples of a penal Catholic church in the Fingal area. It now houses Rush library.

The current Catholic church of Saint Maur is beside the 1776 building. It was dedicated in 1989 and is in the new, post Vatican II style.

Two miles north from the centre of Rush village lies a magnificent portico which is all that remains of Kenure House, a large mansion which had many acres of an estate around it. The name is an anglicised version of "Ceann Iubhair", meaning headland of the yew trees. There is a nearby ruined church which was dedicated to St. Damnan and also nearby are the ruins of a small Norman keep.

Kenure formed part of the ancient manor of Rush, which was vested in the Earls and Dukes of Ormonde in 1666. They held on to their lands in Rush until 1714 until the Echlins took over. They remained there until 1780. Elizabeth Echlin married Francis Palmer of Castlelacken Co Mayo. Colonel R H Fenwick-Palmer, the last of the line, sold the estate to the Irish Land Commission in 1964. The portico of Kenure House was added to the house in and about 1840, by George Papworth, an English architect who practised in Ireland during the 19th century. Many films were made on location at the great house. These include The Face of Fu Manchu (1965), Ten Little Indians (1965 film which features the great house extensively as the main setting for the story, with some fleeting glimpses of the outside portico) and Jules Verne's Rocket to the Moon (aka Rocket to the Moon) (1967). The house fell into disrepair and was demolished in 1978, when the housing estate Saint Catherines was built on part of the former estate.

Rush was notorious for smuggling in the 18th century after the British imposed excise duties on a large number of goods. It was home to the famed smuggler, Jack Connor (aka Jack the Batchelor and also Jack Field) and the birthplace of the pirate Luke Ryan.

Jack Connor was a popular Robin hood type figure who is mentioned in an old ballad:

The lover may sigh
The courtier may lie
And Croesus his treasure amass,
All these joys are but vain
They are blended with pain
I'll stand behind Field and my glass

Jack operated out of the "Smugglers Cave" between Loughshinny and Skerries. He died in 1772 and was buried in Kenure cemetery.

Luke Ryan was born in Rush in 1750. He emigrated to France when he was young and became a Lieutenant in Dillon's Irish Regiment. He later became a smuggler after returning to Rush. He was commissioned by Benjamin Franklin to run a privateer, The Black prince, to plunder English ships. He accumulated great wealth from his smuggling, but it was taken from him by the French. He eventually died in a debtors prison in 1789 owing a debt of 200 pounds.

The Martello towers on the headland near the North Beach and at Drumanaugh were built in 1803 as a defence against Napoleon. 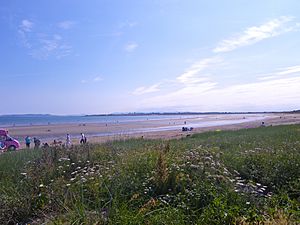 Rush has two sandy beaches, called the North Beach and South Beach, which are separated by the rocky head of the peninsula and a small tidal harbour, Rush Harbour. The peninsula is the closest point of land to the privately owned Lambay Island. The prevailing winds and tides make Rush South Beach an extremely popular kitesurfing location while its sand and dunes attract many visitors. Close to the south shore is 9 hole golf links. In the past, Rush had many caravan sites which were popular for summer holidays. It still has some caravan sites close to its beaches.

Rush sailing club is also located near the south shore and operates from a second harbour, Rogerstown harbour, situated on the Rogerstown Estuary, known locally as 'the pier.' This harbour is also used by a supply boat, The Shamrock, which provides supplies for the inhabitants of Lambay island.

Rush has three primary schools, including:

There is also a secondary school, including: St.Joseph's Secondary School.

Rush and Lusk railway station, opened on 25 May 1844, is served by Commuter (formerly "Arrow") suburban trains between Dublin and Drogheda.

Rush is twinned with the following place:

All content from Kiddle encyclopedia articles (including the article images and facts) can be freely used under Attribution-ShareAlike license, unless stated otherwise. Cite this article:
Rush, Dublin Facts for Kids. Kiddle Encyclopedia.