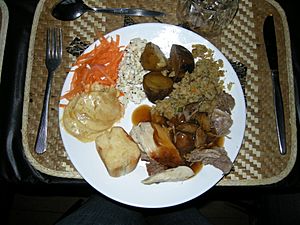 A hāngi dinner as served to tourists.

When the indigenous Māori arrived in New Zealand from tropical Polynesia they brought a number of food plants, including kūmara (sweet potato), taro, uwhi, hue and tī-pore. Most of these plants grew well only in the north of the North Island; kūmara could be grown as far south as the northern South Island, and became a staple food that could be stored over winter. Native New Zealand plants such as fernroot became a more important part of the diet, along with insects such as the huhu grub. Earthworms, called noke, are even unusually a part of the traditional Māori diet. Problems with horticulture were made up for by an abundance of bird and marine life. The large flightless moa were soon hunted to extinction. Rāhui (resource restrictions) included forbidding the hunting of certain species in particular places or at certain times of year, so that the numbers could regenerate. 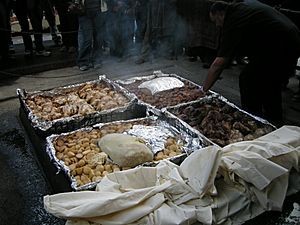 Preparation of a modern hāngi for tourists at Mitai Maori Village, Rotorua.

Like other Polynesian people, Māori cooked food in earth ovens, known in New Zealand as hāngi, although the word umu is also used as in other Pacific languages. Stones are heated by fire and food packed in leaves are placed on top. The packs are further covered with foliage and cloth, or, wet sacks, then earth. Other cooking methods included roasting and, in geothermal areas, boiling or steaming using natural hot springs and pools. Occasionally food would be boiled in non-geothermal areas by putting hot stones into a bowl with water and the food; and some food was also cooked over the open fire. Some foods were preserved using smoke, air-drying, fermentation or layers of fat—particularly muttonbirds. Māori were one of the few people to have no form of alcoholic beverage.

In traditional Māori religion food was noa, or non-sacred. This meant care had to be taken to prevent it from coming into contact with tapu places or objects. If it did, the tapu of the place or object, and often the people associated with it, would be at risk. High chiefs, and people engaged in tapu work such as tattooing, were tapu and were restricted in how they could deal with food; the most tapu needing to be fed by others. One story tells of a war party which had to be postponed as no non-tapu people were available to load the food supplies into the party's waka. 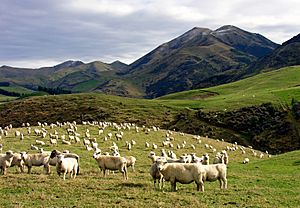 When Europeans (Pākehā) first arrived in New Zealand from the late eighteenth century, they brought their own foods with them. Some of these, especially pork and potatoes, were quickly adopted by Māori. Potatoes were particularly popular as they were grown in a similar way to kūmara but produced a much higher yield with less effort. Other European foods such as wheat, pumpkin, mutton, sugar, and many types of fruit also became a part of the Māori diet and were widely traded with visiting ships. American sailors brought new varieties of kumara to New Zealand, and these high-yield varieties quickly superseded the original varieties of kumara. (Today most kūmara are the commercial varieties Owairaka Red, Toka Toka Gold and Beauregard.)

Alcohol, initially rejected as 'wai piro' (stinking water), also became part of Māori life. Most Māori tribes grew surpluses of food for trade with other tribes and with European visitors and settlers. Some tribes grew wealthy from this trade, although the Māori food industry declined in the mid-nineteenth century because of land loss and competition from settler farmers. Many traditional food sources, such as the kereru (wood pigeon) and other birds, as well as some types of fish and plants, became scarce as forests were destroyed and species were over-hunted.

All content from Kiddle encyclopedia articles (including the article images and facts) can be freely used under Attribution-ShareAlike license, unless stated otherwise. Cite this article:
Māori cuisine Facts for Kids. Kiddle Encyclopedia.