In 1998, six improvisers from the improv group Mission IMPROVable at UMASS Amherst moved to Chicago, Illinois to train and perform.

By the year 2000, the group began touring their short form comedy show and in 2001 they performed at NACA (National Association for Campus Activities). They began performing shows at colleges all across the country. Soon thereafter, the group grew, hiring more improvisers so that they could perform more widely, travelling in their van nicknamed "Vanarky".

In 2002 the first handful of M.I. performers came out to Los Angeles, California to develop a sketch pilot for MTV, but were not picked up in favor of Human Giant. However, they continued to be permanent fixtures on many of LA's most popular comedy stages. 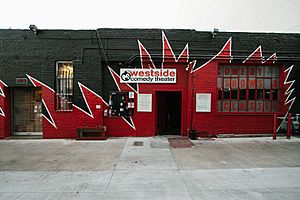 The theater was opened on April 1, 2009 by former members of Mission IMPROVable, including Lloyd Ahlquist, co-creator of the YouTube series Epic Rap Battles of History. At the time of the theater's founding, Ahlquist served as general manager and artistic director. Co-founder Sean Casey took over for Ahlquist in 2011.

Notable past and present performers

Currently, Mission IMPROVable has over 50 members and performs over 350 shows a year from Hawaii to Singapore. M.I. Productions is also involved in projects for film, TV and created an alcohol awareness show A Shot of Reality for colleges and military bases across the country.

The founders appear together onstage at the theatre weekly in The Grind, a longform improv show.

All content from Kiddle encyclopedia articles (including the article images and facts) can be freely used under Attribution-ShareAlike license, unless stated otherwise. Cite this article:
M.I.'s Westside Comedy Theater Facts for Kids. Kiddle Encyclopedia.