The Mabee-Gerrer Museum of Art is a non-profit art museum in Shawnee, Oklahoma, USA. It is located on the Oklahoma Baptist University Green Campus, being the campus of the former St. Gregory's University. The museum operated independently of St. Gregory's and survived its closure.

The museum’s collection includes over 3,500 artworks, and spans over 6,000 years of art, and represents cultures from around the world including ancient Egyptian, Chinese, pre-Columbian, African, Native American, European, and American art. The museum houses the official portrait of Pope Pius X and Oklahoma’s only Egyptian mummies. The museum includes a gift shop that sells educational toys, publications related to their exhibitions and arts and crafts from local artisans. The MGMoA is a member of the Oklahoma Association of Museums and a member agency of Oklahoma City's Allied Arts. The museum hosts the annual festival Arts Trek. 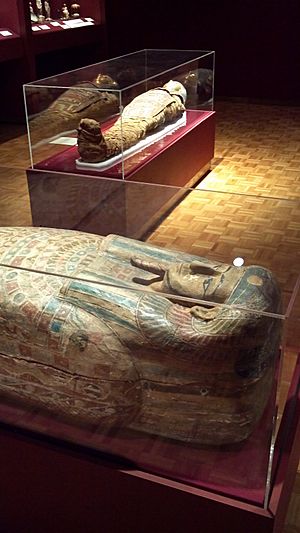 The Egyptian gallery showcases a sarcophagus, a Roman era Egyptian mummy and the mummy of a woman named Tutu who died approximately 332 BCE.

The museum is named for Fr. Gregory Gerrer, a Benedictine monk of St. Gregory's Abbey, who was an art historian and art collector. During his travels in the United States, Europe, Africa and South America, he acquired art and artifacts to exhibit in Oklahoma. In 1919, the collection moved to Benedictine Hall where it was called St. Gregory's Abbey Art Gallery and Museum. G. Patrick Riley visited the museum as a child in the early 1940s, and credits these visits as his inspiration to become an artist. Starting in 1962, the Gerrer collection was on long term loan to the Oklahoma Science and Arts Foundation in Oklahoma City. St Gregory's Abbey built a new building as a permanent home for the collection with matching funds from the Mabee Foundation. The Mabee-Gerrer Museum of Art opened in 1979. The building was designed by Chadsey/Architects from Tulsa, Oklahoma.

The museum was the exclusive United States venue to show Etruscan Treasures, an exhibit which featured Etruscan and Roman gold work, as well as artifacts from the Vatican Museums. This was the first time that the gold jewelry, from the collection of Prince Fabrizio Alliata di Montereale, was publicly displayed. The exhibit ran from June 1 through October 31, 2004, and was featured in a documentary produced by Oklahoma's Public Television Station.

In August 2015, St. Anthony Shawnee Hospital performed CT scans on the two Egyptian mummies in the museum's collection. The mummies previously visited the same hospital in 1991 for X-rays. The scans showed that Tutu's organs had been individually mummified and placed back inside her stomach and chest cavity before she was wrapped in linen.

The museum's collection began with a gift in 1903. While Fr. Gregory Gerrer was traveling in the Holy Land, he was presented with an Egyptian scarab with the hieroglyphic goose symbol on it.

The institute's holdings in Spanish Colonial art include retablos (small religious paintings, frequently on tin), wooden sculptures of saints, and paintings. One anonymous painting, Christ of Ixmiquilpan, dates to the early 19th century and captures a miraculous alter scene in Mexico City. A temporary exhibition of Spanish Colonial Art ran from April to June in 2010. The collection was shown at the Arlington Museum of Art in Arlington, Texas in a special exhibition from April 12 to May 26, 2013.

All content from Kiddle encyclopedia articles (including the article images and facts) can be freely used under Attribution-ShareAlike license, unless stated otherwise. Cite this article:
Mabee-Gerrer Museum of Art Facts for Kids. Kiddle Encyclopedia.