Madballs is a series of toy foam balls originally created by AmToy, a subsidiary company of American Greetings (Now Cloudco Entertainment) in the mid-1980s, later being revived by Art Asylum (2007–2008) and Just Play, Inc. (2017–2019). The balls incorporated gross-out humor and each was given a character synopsis and an odd name. The toyline expanded into a franchise with comic books, direct-to-video cartoons, and a video game for the ZX Spectrum, Amstrad CPC and Commodore 64.

The toys were rubber or foam collectible bouncing balls with grotesque faces and designs. The toys sold well as a passing fad. There were two series of the original Madballs collectible toys. Each series consisted of eight balls, as well as a collection of Super Madballs, a larger version of the original Madballs shaped like other sports balls, such as the American football-shaped "Touchdown Terror", the soccer ball-shaped "Goal Eater" and the basketball-shaped "Foul Shot".

All Madballs toys were conceived in the early 1980s by the creative team at American Greetings Properties, which was formally named Those Characters From Cleveland, or TCFC for short: Ralph Shafer, George Chanter, Mark Spangler, Jim Elliott, Kim Hammeren and Vint Gonser. Editorial by Clark Wiley and Tom Jacobs.

These were posable figures, with an ejectable/swappable head:

Due to the popularity of the Madballs, there were many similar imitation toys, such as:

In 2016, the vinyl figure company Kidrobot released nine of the original Madballs in their original foam style, slightly modified. They also released keychains and vinyl figure blind boxes. These are the Madballs that were released: 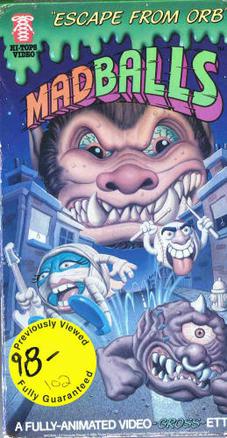 Unlike many high-profile toylines at the time, the Madballs did not have an accompanying television series. They did, however, have two direct-to-home video cartoons released by Nelvana.

The first one, released in 1986, was a 22-minute episode called Madballs: Escape from Orb in which the titular characters are a rock and roll band who performs across the galaxy, but heads for Earth, as music is illegal on their home planet, Orb. The video also featured a female, cartoon-exclusive Madball named Freakella, modeled after the Bride of Frankenstein. It was directed by Laura Shepherd are written by Heather MacGillvray and John de Klein.

The second one, released in 1987, was another 22-minute episode called Madballs: Gross Jokes that was a series of jokes and skits performed by the Madballs. Both of these releases are only available on VHS and are not yet available on either DVD or Blu-ray.

Marvel Comics' former children's comics subsidiary, Star Comics, released a three-issue miniseries (September-November 1986),which continued with issue #4 (June 1987) as a bi-monthly comic book. The series was cancelled with issue #10 (June 1988). The main villains of the comic book were Dr. Frankenbeans, who was in many ways similar to Victor Frankenstein, and his bumbling assistant Schnivelitch, who resembled Igor.

Marvel UK released a one-shot issue called Madballs Annual (1988). Produced by Marvel UK in hardcover format, it reprints the comic book story of the creation of the Madballs by Dr. Frankenbeans and also features games and activities.

In early 2006, toy company Art Asylum announced that it had partnered with original rights holder American Greetings to revive the Madballs toys, with both classic characters and new designs. Toy company, Basic Fun Inc., took up the task of producing/selling the new Madballs designed by artist James Groman, who worked on the original line. As of November 2007, the toys began appearing in toy stores in the U.S.

Madballs Classic Series 1 consists of five re-designed Madballs characters from the original Series 1 (Screamin' Meemie, Skull Face, Bash Brain, Slobulus and Horn Head) and also the first new Madballs character since the toy line's original demise in the mid- to late 1980s: Repvile, an angry, blue, scabrous reptilian. Newly designed sculpts for two other Madballs, Dust Brain and Freaky Fullback, as well as Super Madball Touchdown Terror, were also shown at Toy Fair and Comic-Con 2006, but they were never released. American Greetings also hinted at the creation of a Super Madball named Goalrilla which would mimic the design of a soccer ball (this was possibly a redesign of the original Goal Eater Super Madball). Aargh from the original Series 1 is the only standard-sized character that was not redesigned or mooted for redesign, although Repvile seems to be a homage to the original Aargh Madball.

Six more Madballs forming Classic Series 2 were released in the U.S. in 2008 (Freaky Fullback, Wolf Breath and Swine Sucker from the original Series 2, plus Dust Brain and Oculus Orbus from the original Series 1 and new Madball Blech Beard, a puntastically named ghastly pirate). The rebooted Madballs line was noted for its vastly more detailed sculpts; this was especially noticeable in the redesigned original characters.

In addition to the standard Madballs Classic Series, there was an entirely new Madballs variant in stores called Madballs Sick Series. Each of the (so far released) two series in this line featured three re-designed Madballs characters from the Classic Series (Bash Brain, Slobulus and Skull Face composed Sick Series 1 and Freaky Fullback, Dust Brain and Blech Beard composed Sick Series 2) which could be squeezed to reveal their insides (for example, Bash Brain had brains that bubbled, Slobulus contained eyeballs that popped out and Skull Face concealed spiders that squirmed out).

Toy designer James Groman has shared previews for two upcoming Madballs 6″ Scale Action Figures, which will be coming from Megalopolis Toys. The figures were announced in June 2020. These 6″ scale figure will feature weapons and interchangeable parts. They are modeled after the classic "Head Popping" Madballs figures from the late 1980s; however, these do not feature the head popping gimmick, opting for articulation and a more "action figure"-like approach.

The images showcase both Horn Head and Splitting Headache and will be part of the Premium DNA toy line.

In 2009 European territories, including Italy and the U.K., began receiving a series of 10 officially licensed miniature water-squirting Giraprendi Madballs. The Italian Madballs are slightly larger (golf ball-sized) and more rubbery than their U.K. counterparts. In the U.K., they are dispensed sealed in small semi-transparent plastic spheres from vending machines which also distributed Nintendo- and Disney-branded toys. Some of the toys are based on the planned (but never made) Classic Series 3 and Classic Series 4 Madballs, some simply with name changes; others are entirely new creations. They are as follows:

A video game based on the toy franchise, simply titled Madballs, was published in 1988 by Ocean Software for a variety of then-popular 8-bit home computers. It was a top-down view action game and received poor to average reviews from the gaming media.

As part of the E3 videogame show, it was announced on May 31, 2009 that Canadian game developer PlayBrains was releasing a video game sequel to BaboViolent 2, including Madballs characters called Madballs in Babo: Invasion. It was released for Xbox Live Arcade on July 15, 2009. The gameplay involves rolling around expansive terrain maps carrying large weaponry (machine guns, etc.) and causing mass destruction. It also includes four player co-op, team v. team and free-for-all modes over Xbox Live, in addition to a unique multiplayer mode where two teams of players build their side of the map, then attack a base on the other team's side. There is also a multiplayer mode where people can play as the head of their Xbox Live avatars. Of the characters in the game, only two are Madballs: Oculus Orbus and Horn Head. An iPhone, iPod Touch and iPad game based on the Madballs characters titled Babo Crash HD was also released.

All content from Kiddle encyclopedia articles (including the article images and facts) can be freely used under Attribution-ShareAlike license, unless stated otherwise. Cite this article:
Madballs Facts for Kids. Kiddle Encyclopedia.