Mahonia aquifolium, Oregon grape or holly-leaved berberry, is a species of flowering plant in the family Berberidaceae, native to western North America. It is an evergreen shrub growing 1 m (3 ft) to 3 m (10 ft) tall by 1.5 m (5 ft) wide, with pinnate leaves consisting of spiny leaflets, and dense clusters of yellow flowers in early spring, followed by dark bluish-black berries.

The specific epithet aquifolium denotes "sharp-leafed" (as in Ilex aquifolium, the common holly), referring to the spiny foliage.

The common name is often, and always in the United Kingdom, left unhyphenated as "Oregon grape", though doing so invites confusion with the true grapes. Some authors avoid this confusion by using "Oregon grape-holly" or "Oregon holly-grape" as a vernacular name for any species of Mahonia. It is also occasionally printed as "Oregongrape".

Mahonia aquifolium is not closely related to either the true holly (Ilex aquifolium) or the true grape (Vitis vinifera cv.).

Mahonia aquifolium grows to 1–2 m (3 ft 3 in–6 ft 7 in) tall by 1.5 m (5 ft) wide, with pinnate leaves up to 30 cm (12 in) long, each leaf made up of spiny leaflets. The leathery leaves resemble those of holly and the stems and twigs have a thickened, corky appearance. The flowers, borne in dense clusters in late spring, are yellow, and are followed by spherical dark dusty blue berries, which give rise to the common name "Oregon grape".

Some authors place Mahonia in the barberry genus, Berberis. The Oregon-grape is not related to true grapes, but gets its name from the purple clusters of berries whose color and slightly dusted appearance are reminiscent of grapes. 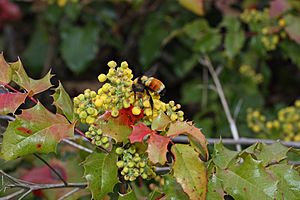 The yellow flowers are in a raceme 3–8 cm long. Bombus species and other insects pollinate the flowers. 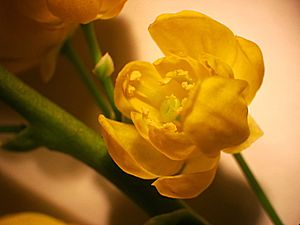 Each of the six stamens, opposite the petals, terminates in two spreading branches. The six bright yellow petals are enclosed by six bright yellow sepals. At the base of the flower are three greenish-yellow bracts. Less than half as long as the sepals, only one is partially visible.

Mahonia aquifolium is a native plant in the North American West from Southeast Alaska to Northern California, and eastern Alberta to central New Mexico, often occurring in the understory of Douglas fir forests (although other forest types contain the species) and in brushlands in the Cascades, Rockies, and northern Sierras.

In some areas outside its native range, M. aquifolium has been classified as an invasive exotic species that may displace native vegetation.

Mahonia aquifolium is a popular subject in shady or woodland plantings. It is valued for its striking foliage and flowers, which often appear before those of other shrubs. It is resistant to summer drought, tolerates poor soils, and does not create excessive leaf litter. Its berries attract birds.

Numerous cultivars and hybrids have been developed, of which the following have gained the Royal Horticultural Society's Award of Garden Merit:

The small purplish-black fruits, which are quite tart and contain large seeds, are included in small quantities in the traditional diets of Pacific Northwest indigenous peoples, mixed with salal or another sweeter fruit. Today, they are sometimes used to make jelly, alone or mixed with salal. Oregon-grape juice can be fermented to make wine, similar to European barberry wine folk traditions, although it requires an unusually high amount of sugar. The berries can also be eaten raw after the season's first frosts.

The inner bark of the larger stems and roots of Oregon grape yields a yellow dye; the berries give purple dye. As the leaves of Oregon grape are holly-like and resist wilting, the foliage is sometimes used by florists for greenery and a small gathering industry has been established in the Pacific Northwest.

Some Indigenous peoples of the Northwest Plateau use Oregon grape for indigestion.

Oregon-grape is the state flower of Oregon.

As with some Berberis, × Mahoberberis, and other Mahoniae spp., M. aquifolium can serve as an alternate host for Puccinia striiformis f. sp. tritici. (The primary host of Pst being wheat.) However in this case it was only achieved by intentional inoculation in a lab, and it remains unknown whether this naturally occurs.

All content from Kiddle encyclopedia articles (including the article images and facts) can be freely used under Attribution-ShareAlike license, unless stated otherwise. Cite this article:
Mahonia aquifolium Facts for Kids. Kiddle Encyclopedia.