The tart is said to date back to King Henry VIII when he witnessed some of the Queen's Maids of honour eating some cakes and demanded to taste one. He found them delicious and named them after the maids. There are ideas that go even further, citing that the maid who made the tarts was imprisoned and had to produce them solely for the King. However, there is another theory that they were named after Anne Boleyn, a maid of honour at the time, who made the cakes for Henry VIII.

A tea room in Kew in Surrey, "The Original Maids of Honour", dates back to the 18th Century and was set up specifically to sell these tarts. 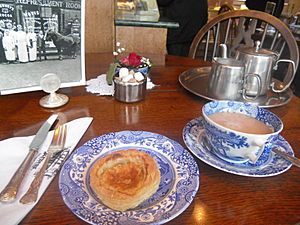 Maids of honour tart at Newens

All content from Kiddle encyclopedia articles (including the article images and facts) can be freely used under Attribution-ShareAlike license, unless stated otherwise. Cite this article:
Maids of honour tart Facts for Kids. Kiddle Encyclopedia.