Malacothamnus fasciculatus, with the common name chaparral mallow, is a species of flowering plant in the mallow family. It is found in far western North America.

The plant is native to southern California and northern Baja California, where it is a common member of the chaparral and coastal sage scrub plant communities.

Malacothamnus fasciculatus is a shrub with a slender, multibranched stem growing 1–5 metres (3.3–16.4 ft) in height. It is coated thinly to densely in white or brownish hairs.

The leaves are oval or rounded in shape, 2 to 11 centimeters long, and sometimes divided into lobes. The inflorescence is an elongated cluster of many pale pink flowers with petals under a centimeter long. 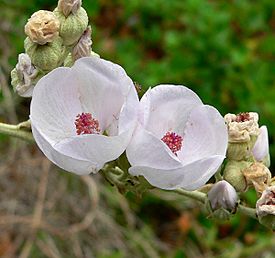 Varieties of the species currently named include: 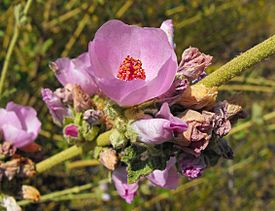 All content from Kiddle encyclopedia articles (including the article images and facts) can be freely used under Attribution-ShareAlike license, unless stated otherwise. Cite this article:
Malacothamnus fasciculatus Facts for Kids. Kiddle Encyclopedia.