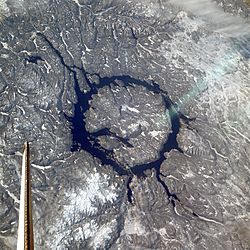 The Manicouagan Crater is one of the oldest known impact craters. It is in the Côte-Nord region of Québec, Canada.

It was caused by the impact of a 5 km (3 mi) diameter asteroid about 215.5 million years ago, in the Upper Triassic.

The crater is a multiple-ring structure about 100 km (60 mi) across. Its inner ring is its most prominent feature. This is a 70 km (40 mi) diameter annular lake, the Manicouagan Reservoir, surrounding an inner island plateau. It is the earth's fifth largest confirmed impact crater.

The Manicouagan crater may have been part of a multiple impact event which also formed the Rochechouart crater in France, Saint Martin crater in Manitoba, Obolon' crater in Ukraine, and Red Wing crater in North Dakota. The five craters form a chain, indicating the breakup and subsequent impact of an asteroid or comet, like the impacts of Comet Shoemaker-Levy 9 on Jupiter in 1994.

Laser argon-argon dating of the glass formed by the impacts, and stratigraphic evidence, support an age of 215 ± 25 Myr. The impact locations have moved large distances in the intervening 214 million years. Three of the craters—Rochechouart, Manicouagan and Saint Martin—formed a 5,000 km (3,100 mi) chain at latitude 22.8° N, while Obolon' and Red Wing lay on identical declination paths with Rochechouart and Saint Martin respectively. All of the craters had previously been known and studied, but their paleoalignment had never before been demonstrated. The chance that these craters could be aligned like this due to chance are nearly zero.

All content from Kiddle encyclopedia articles (including the article images and facts) can be freely used under Attribution-ShareAlike license, unless stated otherwise. Cite this article:
Manicouagan crater Facts for Kids. Kiddle Encyclopedia.