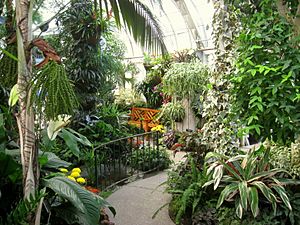 Manito Park and Botanical Gardens is a 90-acre (0.36 km2) public park with arboretum, botanical gardens, and conservatory, located at 17th Ave and Grand Blvd in Spokane, Washington, United States. It is open daily without charge.

The park was originally a public recreation area called Montrose Park. In 1903 its name was changed to Manito, from the Algonquian word manitou. A park commission was formed in 1907 with annual funding, and in 1913 the famed Olmsted Brothers firm completed their landscaping plans for Spokane parks, including Manito Park. The Park was at one time a zoo until 1932 when the zoo closed down because of the lack of funding during the Great Depression. Today some remnants of the zoo can still be seen, such as an iron bar sticking out of a rock that was once part of the bear cages. 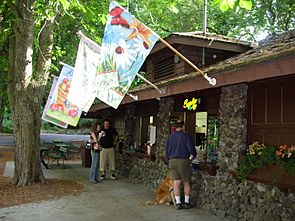 Aside from the gardens, Manito is home to more common park fare. The park has two play structures, one in "upper Manito" and the other by the duck pond at "lower Manito". The duck pond lies in the northwest corner of the park and is home to many ducks and geese. The Park Bench Cafe, located at the intersection of Manito Place and Tekoa St., is a small cafe which serves drinks and snacks during the Summer. Sections of the park remain in a natural, wild state. Exposed basalt is common throughout the park, especially so in the undeveloped areas where large rocks and cliffs dominate the landscape. During Winter the grass covered hills of lower Manito are a popular destination for sledding.

Activities such as baseball, sledding, tennis, and bird watching are very popular among casual visitors. Some of the more alternative activities observed at the park include frolf, and parkour.

All content from Kiddle encyclopedia articles (including the article images and facts) can be freely used under Attribution-ShareAlike license, unless stated otherwise. Cite this article:
Manito Park and Botanical Gardens Facts for Kids. Kiddle Encyclopedia.