Manlius Township is a civil township of Allegan County in the U.S. state of Michigan. The population was 3,017 at the 2010 census.

The city of Fennville is at the southwest corner of the township, but is administratively autonomous.

New Richmond is an unincorporated community within the township at 42°38′52″N 86°06′20″W﻿ / ﻿42.64778°N 86.10556°W﻿ / 42.64778; -86.10556 near where Old Allegan Road and the Chesapeake and Ohio Railway cross the Kalamazoo River. It is about a mile west of where the Rabbit River flows into the Kalamazoo. In 1836, three eastern investors, led by John Allen of Ann Arbor, arranged to found a city here. Allen platted the village of "Richmond", after his home town of Richmond, Virginia. The village was platted covering all of section 8 and the eastern half of section 7, just a bit north and west of the present location. Some land was cleared, a general store and some houses were built, and in November 1837, a post office opened named "Richmond". However, the office closed in October 1839, after Allen's business venture failed in 1838 due to financial depression following the Panic of 1837. Ralph R. Mann, who had been hired by Allen to direct improvements at Richmond, in 1844 moved to a location to the south of the first site and built a water-powered sawmill on the river. This settlement became known as "Manlius", and a post office opened in July 1846. It is said to be named after Manlius, New York. It was for a while a station on the Chicago and West Michigan Railway, but was mostly abandoned in 1874 after the destruction of the mill's dam and the local tavern burned down. With the coming of the railroad, H. F. Marsh laid out a new village of Richmond near the older site, which prospered and after a time supplanted Manlius. In October 1872, the post office was closed in Manlius and another was established named "New Richmond". After a time, the settlement also came to be known as "New Richmond". 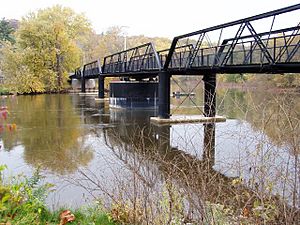 There were 899 households out of which 42.4% had children under the age of 18 living with them, 72.0% were married couples living together, 5.8% had a female householder with no husband present, and 18.2% were non-families. 15.2% of all households were made up of individuals and 4.1% had someone living alone who was 65 years of age or older. The average household size was 2.93 and the average family size was 3.27.

All content from Kiddle encyclopedia articles (including the article images and facts) can be freely used under Attribution-ShareAlike license, unless stated otherwise. Cite this article:
Manlius Township, Michigan Facts for Kids. Kiddle Encyclopedia.