Manti ( MAN-ty) is a city in and the county seat of Sanpete County, Utah, United States. The population was 3,276 at the 2010 United States Census.

According to the United States Census Bureau, the city has a total area of 2.0 square miles (5.1 km²), all of it land.

Manti is located in a semi-arid climate with warm summers and cold winters. Its high elevation means that the climate is cooler than other populated areas of Utah, especially during summer. Summers highs average in the mid-80s°F, with winter highs in the mid-30s°F. Winter lows, however, dip to around 15–20°F. Pacific storms move through the region from October through May and spring is the wettest season. However, summer, which is the driest seasion, primarily relies on precipitation from scattered diurnal thunderstorm activity and the Gulf of California monsoon. Winter and spring see frequent snowfall. Precipitation averages 12.70 inches and snowfall 52.2 inches. The record high temperature is 110°F (43°C), set on August 6, 1895, while the record low is −27°F (−33°C), set on January 22, 1937.

Although Utah as a whole only averages 2–3 tornadoes per year, Manti was hit directly by an F2 tornado on September 8, 2002. The tornado was on the ground for 15 minutes and managed to cause $2 million in damage as it tore through southeastern Manti. Remarkably, no one was injured or killed in the incident.

There were 930 households, out of which 46.7% had children under the age of 18 living with them, 68.0% were married couples living together, 9.7% had a female householder with no husband present, and 20.2% were non-families. 18.8% of all households were made up of individuals, and 11.6% had someone living alone who was 65 years of age or older. The average household size was 3.25 and the average family size was 3.74. 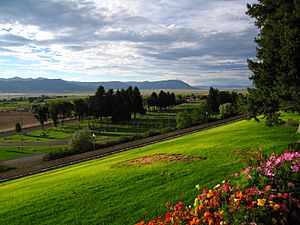 A view of Manti Cemetery from Temple Hill

Manti was one of the first communities settled in what was to become Utah. Chief Wakara (or Walker), a Ute Tribe leader, invited Brigham Young to send pioneers to the area to teach his people the techniques of successful farming. In 1849, Brigham Young dispatched a company of about 225 settlers, consisting of several families, to the Sanpitch (now Sanpete) Valley. Under the direction of Isaac Morley and George Washington Bradley, the settlers arrived at the present location of Manti in November. They endured a severe winter by living in temporary shelters dug into the south side of the hill on which the Manti Temple now stands. Brigham Young named the new community Manti, after a city mentioned in the Book of Mormon. Manti was incorporated in 1851. The first mayor of Manti was Dan Jones. Manti served as a hub city for the settlement of other communities in the valley.

Relations with the local Native Americans deteriorated rapidly and the Walker War soon ensued. The war consisted primarily of various raids conducted by the Native Americans against Mormon outposts in Central and Southern Utah. The Walker War ended in the mid-1850s in an understanding negotiated between Brigham Young and Wakara. Shortly thereafter, Welcome Chapman and Wakara oversaw the baptism of scores of Wakara's tribe members. Although immediate hostilities ended, none of the underlying conflicts were resolved.

In 1865 Utah's Black Hawk War erupted when an incident between a Manti resident and a young chieftain exploded into open warfare between the Mormon settlers and the local Native Americans. Forts were built in Manti and other nearby communities. Smaller settlements in the area were temporarily abandoned for the duration of the war. In the fall of 1867, Chief Black Hawk made peace with the settlers, but sporadic violence occurred until 1872 when federal troops finally intervened. Many Mormon settlers who fought and died in the wars are buried in the Manti Cemetery. Most of the Utes were eventually relocated to the Uintah and Ouray Indian Reservation in Eastern Utah.

Manti is located in the South Sanpete School District and has one elementary school, as well Manti High School, who have the Templars as their mascot and compete in the 3A level of competition (out of five levels). Middle school students attend in nearby Ephraim.

All content from Kiddle encyclopedia articles (including the article images and facts) can be freely used under Attribution-ShareAlike license, unless stated otherwise. Cite this article:
Manti, Utah Facts for Kids. Kiddle Encyclopedia.