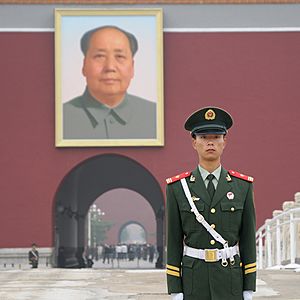 Tiananmen with a portrait of Mao Zedong

Maoism is the communist (a plan about how countries should work) idea created by the Chinese man Mao Zedong. Mao believed that peasants, not factory workers, should lead the communist revolution (change in government). China followed Maoism when he became leader, in 1949. This created differences with communism in the USSR and Cuba. Maoism is still practiced in China today, but it has become different since Mao died in 1976. Today the Chinese economy is considered capitalist. (a plan about free markets). but some still call China communist.

All content from Kiddle encyclopedia articles (including the article images and facts) can be freely used under Attribution-ShareAlike license, unless stated otherwise. Cite this article:
Maoism Facts for Kids. Kiddle Encyclopedia.