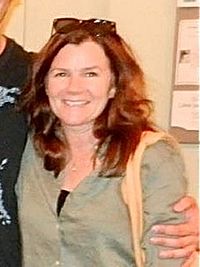 Mary Megan "Mare" Winningham (/mɛər/; born May 16, 1959) is an American actress and folk-blues singer-songwriter. She was born in Phoenix, Arizona. Winningham began her acting career in 1976. She won two Emmy Awards during her career. She was also nominated for the Academy Award for Best Supporting Actress for the 1995 movie Georgia.

All content from Kiddle encyclopedia articles (including the article images and facts) can be freely used under Attribution-ShareAlike license, unless stated otherwise. Cite this article:
Mare Winningham Facts for Kids. Kiddle Encyclopedia.