Auguste of Baden-Baden facts for kids

Auguste of Baden-Baden (Auguste Marie Johanna; 10 November 1704 – 8 August 1726) was born a Margravine of Baden-Baden, she was the Duchess of Orléans by marriage to Louis d'Orléans, Duke of Orléans. Her husband was a grandson of her father's former enemy Louis XIV of France. Known in France as Jeanne or Auguste de Bade, she died in childbirth. She is an ancestor of Louis Philippe I and of several members of royal families of Europe such as the Spanish and Italian as well as the present Grand Duke of Luxemburg. 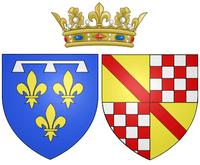 Coat of arms of Auguste of as Duchess

All content from Kiddle encyclopedia articles (including the article images and facts) can be freely used under Attribution-ShareAlike license, unless stated otherwise. Cite this article:
Auguste of Baden-Baden Facts for Kids. Kiddle Encyclopedia.