West of Journal Square and north of Holy Name Cemetery on the West Side, the Marion's two distinct neighborhoods are separated by PATH rail lines. It borders other districts of Riverbend, Croxton and the West Side, and is sometimes considered to include the area along the Hackensack Riverfront, Tonnele Circle, and neighborhood overlapping India Square. Marion is mostly a low-rise residential district that is home to several new housing developments, light manufacturing, restaurants, LaPointe Park and the Marion Branch Public Library. Broadway, U.S. Route 1/9, Sip Avenue and West Side Avenue are the main streets running through the neighborhood.The 1940 Marion Gardens housing Project creates the western residential border for the section. 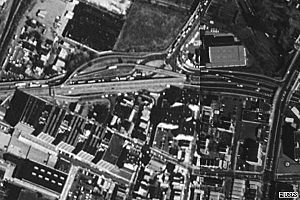 The warehouse district between PATH and Pulaski Skyway 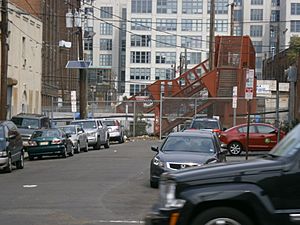 The Marion Section was laid out in the 1870s and was developed in the early 20th century. The name came from old Marion Hotel or the founders of a watch company located near city line. Originally concentrated with families of Italian ancestry, Marion was planned as a blue- collar residential community to work at Lorillard Tobacco Company, American Can Company, or nearby railroad yards.

Despite the fact that tracks run through the district there is no station. Former mayor, Jerramiah Healy had requested that Marion be given a stop on the PATH train at Broadway and West Side Avenue, supplanting the nearest station at Journal Square. There are a growing number of condos and other housing units being built in the Marion neighborhood and city officials feel a stop on the PATH system will be necessary to unclog the city streets and lessen the commute for residents. Officials feel a station would help to bolster development in the neighborhood, which has fewer cultural attractions than many Jersey City neighborhoods and is without a school. Public School #23 operates on Romaine Ave.

The American Can Company Building

The area near the foot of on Newark Avenue is site of Marion Junction, an important rail junction in the 19th century. The area is surrounded by manufacturing and warehouse buildings a few of which have received New Jersey Register of Historic Places designation. Some have been converted to residences or other uses, notably that of the American Can Company. The Middle East Center for the Arts (MECA) is an exhibition space at Mana Contemporary also housed in a former manufacturing building and that is an extension of the fine arts transportation department of Moishe's Moving Systems. The 1,000,000 (one million) square foot building is also home to dance companies of Shen Wei and Karole Armitage.

The Marion Greenway Park has received funding and eventually will connect to the Hackensack RiverWalk with a 1,300 linear foot extension to Lincoln Park and the East Coast Greenway. The reclaimed brownfield will be transformed to a 32-acre waterfront park including two soccer fields, a drill/practice area, a lawn/fairgrounds, and a mile long jogging/walking path. Portions were once part of the PJP Landfill.

All content from Kiddle encyclopedia articles (including the article images and facts) can be freely used under Attribution-ShareAlike license, unless stated otherwise. Cite this article:
Marion Section Facts for Kids. Kiddle Encyclopedia.