The Martyrs' Shrine, also known as Shrine of the Canadian Martyrs (French: Sanctuaire des martyrs canadiens)is a Roman Catholic church in Midland, Ontario, Canada, which is consecrated to the memory of the Canadian Martyrs, six Jesuit Martyrs and two lay persons from the mission of Sainte-Marie among the Hurons. It is one of nine national shrines in Canada, including, among others, St. Joseph's Oratory in Montreal and the Basilica of Sainte-Anne-de-Beaupré. 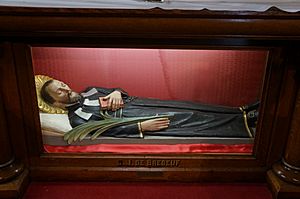 Statue of Saint Jean de Brébeuf. The shrine houses the bones of Brébeuf, and two other Canadian Martyrs.

In 1907, Dennis O'Connor, Archbishop of Toronto, consecrated a small chapel at Waubaushene, near the site where Sts. Jean de Brébeuf and Gabriel Lalemant were martyred. In 1925, Fr. John M. Filion, provincial superior of Jesuits in Canada, decided to pursue the construction of a larger church closer to the mission. He bought the Standin farm in Midland, across the road from Sainte-Marie.

Construction began that year, using some materials from the Waubaushene church and others donated by lumber companies in Northern Ontario. Pews, stained glass windows, Stations of the Cross and an altar were donated by churches in London and Toronto. The interior, shaped like an overturned canoe, was designed and built by Ildège Bourrie. Construction on the shrine was completed by the winter of 1925, and the shrine was formally consecrated on June 25, 1926 by Cardinal William Henry O'Connell of Boston, Massachusetts. The shrine houses the bones of St. Jean de Brébeuf, St. Gabriel Lalemant, and St. Charles Garnier. Due to cold temperature conditions, the shrine is closed in autumn and winter, because it was built without any insulation. During that period, the reliquaries are taken out of the church.

The martyrs were subsequently canonized by Pope Pius XI in 1930. Pope John Paul II visited the Martyrs’ Shrine in September, 1984, and prayed over the skull of Brébeuf.

All content from Kiddle encyclopedia articles (including the article images and facts) can be freely used under Attribution-ShareAlike license, unless stated otherwise. Cite this article:
Martyrs' Shrine Facts for Kids. Kiddle Encyclopedia.