Kathleen Mary Norton (née Pearson, 10 December 1903 – 29 August 1992), known professionally as Mary Norton, was an English author of children's books. She is best known for The Borrowers series of low fantasy novels (1952 to 1982), which is named after its first book and, in turn, the tiny people who live secretly in the midst of contemporary human civilisation.

Norton won the 1952 Carnegie Medal from the Library Association, recognising The Borrowers as the year's outstanding children's book by a British author. For the 70th anniversary of the Medal in 2007 it was named one of the top ten winning works, selected by a panel to compose the ballot for a public election of the all-time favourite. Norton's novels The Magic Bed Knob; or, How to Become a Witch in Ten Easy Lessons and Bonfires and Broomsticks were adapted into the 1971 Disney film Bedknobs and Broomsticks. 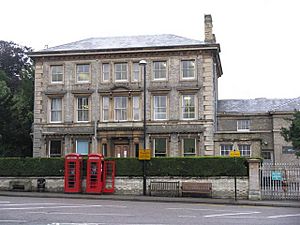 'The Cedars', Norton's home until 1921 and reportedly the setting of The Borrowers

Kathleen Mary Pearson was the daughter of a physician and was raised in a Georgian house at the end of the High Street in Leighton Buzzard. The house now forms part of Leighton Middle School, known within the school as The Old House, and was reportedly the setting of her novel The Borrowers. She married Robert Charles Norton on 4 September 1927 and had four children, two boys and two girls; her son, also named Robert Norton, became a printer and Microsoft executive. Her second husband was Lionel Bonsey, whom she married in 1970.

She began working for the War Office in 1940 before the family moved temporarily to the United States. She began writing while working for the British Purchasing Commission in New York City during World War II. Her first book was The Magic Bed Knob; or, How to Become a Witch in Ten Easy Lessons, published by J. M. Dent in 1945. Its sequel Bonfires and Broomsticks followed two years later and they were re-issued jointly as Bed-Knob and Broomstick in 1957. The stories became the basis for the 1971 Disney film Bedknobs and Broomsticks.

During her latter years Norton lived with her husband in the village of Hartland in Devon. She died of a stroke in Bideford, Devon, England on 29 August 1992. 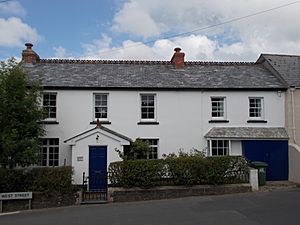 The British first editions of these works were hardcover books published by J. M. Dent. The first story had been previously published in the US as The Magic Bed-Knob, a picture book illustrated with colour paintings by Waldo Peirce.

The first omnibus edition was Bed-Knob and Broomstick (Dent, 1957), with new illustrations by Erik Blegvad. The title Bedknobs and Broomsticks has also been used, after the 1971 Disney film adaptation. 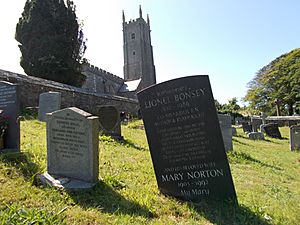 Mary Norton’s final resting place in the graveyard of St. Nectan's Church, the parish church of Hartland, Devon. The inscription on the headstone reads:
“Do not stand at my grave and weep,
I am not there. I do not sleep.
I am a thousand winds that blow.
I am the diamond glints on snow.
I am the sunlight on ripened grain.
I am the gentle autumnal rain.
Do not stand at my grave and cry;
I am not there. I did not die.”
(Extract from a poem by Mary Elizabeth Frye.)

Norton's novels The Magic Bed Knob; or, How to Become a Witch in Ten Easy Lessons and Bonfires and Broomsticks were adapted into the 1971 Disney film Bedknobs and Broomsticks, starring Angela Lansbury and David Tomlinson.

There have been several screen adaptations of The Borrowers:

There have also been numerous theatrical adaptations of The Borrowers.

All content from Kiddle encyclopedia articles (including the article images and facts) can be freely used under Attribution-ShareAlike license, unless stated otherwise. Cite this article:
Mary Norton (author) Facts for Kids. Kiddle Encyclopedia.