Maya & Miguel is an American animated children's television series produced by Scholastic Studios with animation by Starburst Animation Studios and Yeson Animation Studios. It aired on PBS Kids from October 11, 2004 to October 10, 2007, and had a total of five seasons and 65 episodes. The show also ran on Univision's Saturday morning Planeta U block.

Centering around the lives of pre-teen Hispanic twins named Maya and Miguel Santos and their friends, the program is aimed at promoting multiculturalism and education in general. It is geared to the 5-9 age range. Part of the dialogue in each episode in the English version is in Spanish but only individual words or phrases which are explained in English.

The show presents culture and language learning as fun, relevant and rewarding for all children, with a special emphasis on the Latino population. The show chronicles the adventures of two 10-year-old Latino siblings, Maya and Miguel Santos, as they figure out how to leave their stamp on the world around them, and features their relatives and diverse neighborhood friends. This show centers on Maya's well-intentioned meddling in her family and friends' lives, ultimately creating new quandaries to fix. Their mother is from Mexico, and their father is from Puerto Rico. The underlying message is the importance of doing good for the family and community, and the philosophy that shared happiness is greater than personal gain. The show presents a positive, culturally rich portrayal of Latino family, language and cultures. In some markets, each episode ends with Maya announcing, "Here's what some of our friends are up to," introducing clips of children engaging and interacting in ways consistent with the show's themes. Maya concludes episodes by exhorting viewers to "visit your local library like 'Maya & Miguel'".

The show centers on 11 main characters. Other characters are included, such as the family, but the show mainly revolves around these characters: 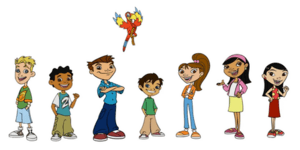